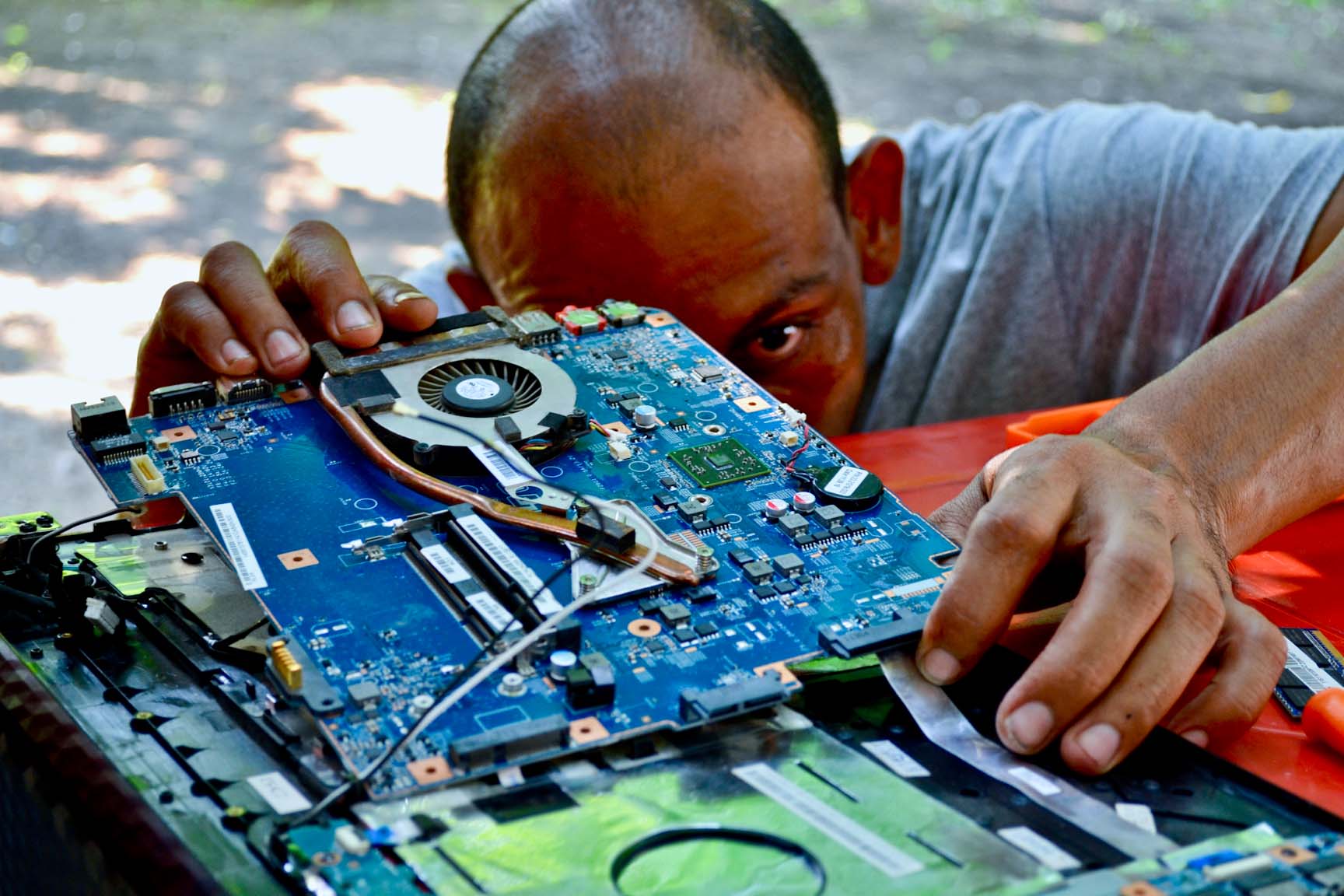 Axel crouches down to examine a busted laptop in the rural pueblo of Chahuites, Mexico. One eye is hidden behind the whirring gadgetry of the computer’s motherboard, the other inspects whatever circuitry might have shorted in the sweltering summer heat. Just outside of the frame, the villagers of Chahuites look on ecstatically; before Axel arrived, the closest computer technician was over an hour’s drive away, and his repairs cost at least several days’ wages. Axel, on the other hand, is undocumented and hungry, and he has agreed to fix the laptop in exchange for dinner.

When Axel was one year old, his mother fled the Guatemalan civil war, literally carrying him across the US border in her arms, and they resettled on Long Island. It wasn’t until Axel was fifteen that he learned he wasn’t an American citizen. Computers became an outlet to escape the boundaries of his undocumented status. “I didn’t need documents to be somebody online,” he said. Computers provided a way to momentarily leave his material body behind, to travel freely through whatever digital spaces he pleased.

Axel was deported to Guatemala the first time at the age of 35. With no connections in the country, he was soon spotted by MS-13 gang members, who, believing he was a rich because he had lived in the US, threatened to kill him if he did not pay a large ransom. Axel fled to Mexico and drifted between small towns, fixing computers, cell phones, and internet routers for room and board. In Mexico, Axel remains an undocumented immigrant, unable to work legally or qualify for social services, just like in the US.

If “photography records the gamut of feelings written on the human face” (Steichen 1961), this photograph tries to capture the ambiguity of a world made faceless not only by online interaction, but also by militarized borders. Today, the other is the one on the opposite side of the (fire)wall. My camera leans toward Axel in an attempt to break this wall, so close that the a tension is palpable. He stares back, but only from behind the boundary of the laptop, his face rendered semi-anonymous by the machinery. The circuits and sockets of the motherboard almost appear to be a landscape all their own, one that is not too dissimilar from the tightly-cordoned, quadrangled geography spanning much of the US-Mexico border. Axel blends into it and stands apart from it at the same time.

If citizenship is ambiguous and ethereal, electronics provide Axel a materiality he can hold onto. When they don’t work, he can reach inside their guts and build them back anew with his own hands. The fixing of computers runs parallel to the fixing of his identity. With no repairmen in rural Mexico, when one’s phone or computer breaks, it is gone for good, and with it much of one’s contact with the outside world and identity. To lose a phone today is also to lose a camera, a phonebook, and a photo album. A busted phone was often the only way for a Chahuites villager to communicate with a family member in the US, or contained the sole photographs of dead loved ones. A revived cell phone or computer had the capacity to reunite families (electronically, at least) and ensure that the dead could be remembered (and therefore return to the world of the living during Día de los Muertos).

Resurrecting computers is Axel’s own magic. It is a rapturous process, an expertise that defies the camera and the cameraman. Most of the work happens inside the mind and the microchip, inaccessible to the eye or lens. Such are interactions in our modern world: one man and machine (me with my camera) interacting with another man and machine (Axel with his computer). The machines provide the source of the interaction and the boundaries that define it.

Not long after this photograph was taken, the laptop, cradled in Axel’s hands, began to hum again, crossed from one plane to another. Axel handed it back to its owner and asked what time they might eat. He wanted to Skype his mother before dinner.

“Cuban Elbow” is not the kind of photograph that immediately catches the eye. The saturated colors so often splashed across contemporary images of Cuban life are not found here. There are no pastels coating once grand architecture, no couples dancing son in glittering fatigues, nor trumpeters silhouetted against a dusky Malecón sky. It is simply an elbow alone. It is nondescript, sepia, sinewy. An elbow dappled in sunlight, striped in shadow. An elbow poised in the doorway, protruding slightly into the street. It is a stripped-down aesthetic reminiscent of Tomás Gutiérrez Alea’s 1968 cinematic masterpiece, Memories of Underdevelopment, subtle and intimate in its austere umbra. It is set in a moment of stillness, of repose. The afternoon lull draws the viewer in, as if we too have traced Rachel Tanur’s footsteps down an anonymous Cuban side street, and invites us rest in the shade. Tanur’s photograph suggests metaphor, but a metaphor of what? Metaphor has long weighed heavy on the Cuban body. After the Revolution was won, Che Guevara declared that “to build communism, a new man must be created simultaneously with the material base” (1965). The Cuban body was to become the literal anatomy of communist revolution. But instead of a whole, the elbow alone is presented here, disconnected, an isolated limb on an isolated island. Does this left elbow belong to the new man? We cannot see his face. He wears a thin t-shirt, loose jeans, and work boots that suggest the universal drudgery of labor. But as he leans arm akimbo against a well-worn wall—the material base of his country—we do not actually know whether he does so in weariness or in leisure. However, when Tanur snapped “Cuban Elbow,” there was reason to be weary. Cuba was still in its Special Period, a time of widespread poverty that crippled the country at the end of the last century, a century that was supposed to be promised to the communist man. What other dreams once rested upon that elbow? Maybe, when he was younger—like so many other Cuban youths—this man fantasized about becoming a professional baseball player. Maybe he was a southpaw, a lefty, or “zurdo” in Spanish, not to be confused with “izquierdista,” a leftist. A baseball player’s elbow is paradox in Cuba. Most elbows give up after a while, get worn out, and with them the dreams of making it off the island. But in the rare instance that one’s elbow holds up, throws a no-hitter or two, becomes an arm that makes Cuba proud, it inevitably won’t stay in Cuba much longer. That golden elbow will follow the likes of Yasiel Puig or Yoeis Céspedes and, at its apex of national heroism, becomes a defector. A man’s elbow holds a great weight in Cuba. It is an island within an island. It is an elbow alone. Distanced by politics and economic embargo, the American consciousness has forgotten just how close Cuba is. As US-Cuba relations warm, “seeing the authentic Cuba before it disappears” has become a mantra of American tourism. Cuba’s peoples and landscapes become rapidly fading backdrops to American narratives of capitalism as both homogenizing and capable of salvaging the last of a “real” Cuba. Instead, the ubiquitous pictures of rusted vintage cars only evoke the actual distance of the photographer from the lived reality of most Cubans. It is a duality of the picturesque and not pictured, the liminality between the photographed street and private struggle behind closed doors. Tanur does not fall into this trap. She does not attempt the impossible task of capturing the entirety of Cuban spirit or constructing the bodies of her subjects as national monolith. “Cuban Elbow” is not about what might be lost but rather about what can potentially be found right around the next corner, if only one is patient and receptive enough. Tanur focuses on the fragments presented to her, and in doing so finds a link to the whole.