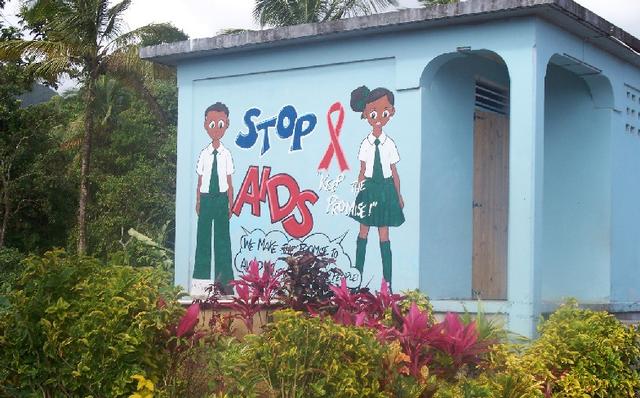 "AIDS awareness in the Caribbean"

Illustrated on the primary school's wall in the community of Grand Fond on the Caribbean island of Dominica is a campaign against the spread of HIV/AIDS. As a traveler, one is alarmed by the practical necessity of such a banner on a primary school's property, but for the community of Grand Fond it displays hope through education and empowerment. Grassroots organization and community consciousness motivated the rendering of the mural that addresses and confronts their youth.

HIV/AIDS is an infectious disease posing high risk in the Caribbean and other developing nations. In 2006, there were 37.2 million people living with HIV [1]. It is estimated that 6,000 youths become infected each day, with the rates of infection among young girls and women rising disproportionate to the rate for males [2].

Huge gender disparities persist in developing nations. Young women are at the greatest risk for contracting HIV in developing nations [2]. Frederich Engels provided one of the earliest known theoretical frameworks for understanding the sources and perpetuation of the inequality of women. Engels noted that as countries changed from food gathering to food hunting and producing, wealth and private property accrued to men causing a “patrilineal descent” [3]. The subjugation of women rose concurrently as the supremacy of men became entrenched in our social institutions. This, in various ways, appears related to different types of societies, such as foraging versus settled agrarian. This situation may have been a function of very early sex-based divisions of labor that effectively helped assure group survival, but, which, upon the advent of surplus, were re-evaluated such that men’s work, hence men, were seen as more important and afforded more rights and privileges than women. It could be that women’s work was seen as easily replaceable or not as complicated as that of men. Women’s work may have been seen as important, but not absolutely necessary. The degree of inequality between men and women probably has varied within and between societies over the stretch of human history [4]. Nonetheless, once a pattern is established, and an ideology is attached to that pattern, changes are slow and often hard won.

This inequality, marked by differences in power and autonomy, also makes sexual relationships unequal [2]. Young boys are socialized to be strong and dominant, making women and young girls easily coerced into sex. Eager to establish their manhood, boys use women unconsciously as pawns of their own sexual identity. Additionally, it is not uncommon for sexual entitlement to be part-and-parcel the socialization of boys. The less social power females have, the greater their sexual vulnerability.

HIV/AIDS is rising significantly in nations due to social constructions of patriarchy. Children, especially young girls must be given tools of empowerment during their early childhood. Traditional femininity poses a threat to the progression of awareness; therefore, positive educational experiences to erase prejudices are important during early childhood [2]. Education must begin at the earliest stages for both boys and girls to create level ground of mutual respect and individual power over their own bodies.

While Dominican women do not suffer harsh sex-based inequalities as can be found in some parts of the developing world, there still are strides to be made in assuring gender equality and equity. The mural confronts the entire community to understand a child’s vulnerability to social pressures that may lead to the infectious disease of HIV. Both a girl and a boy are represented in their community’s school uniform. The bright display of color begs the community’s children to take note and to “keep the promise” to stop AIDS through awareness and child empowerment. The community of Grand Fond refuses to be quiet while losing another child to ignorance and gender inequalities. 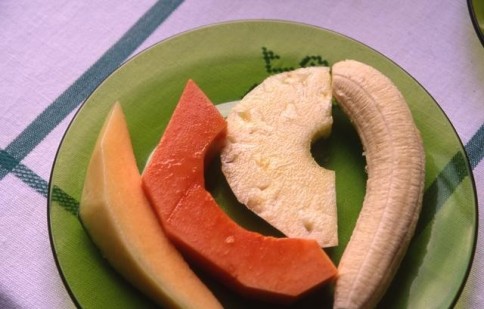 According to the United Nations and protected under international human rights, the right to food is a fundamental human right [1]. Tanur’s “Guatemalan Fruit Plate” displays the vibrant, simplistic beauty of Earth’s gifts without which human survival would be impossible. The photograph evokes a perception of bounty; a pleasing image of a human right available for the asking. Tanur's photograph serves as a gift of cultural symbolism to visitors and guests. Juxtaposing this serene image against the harsh realities of food insecurity forces the engagement of one’s Sociological Imagination to understand the dire consequences of stratification that culminate in, among other things, food insecurity in developing countries like Guatemala. Somewhat slyly, with a muted voice so quiet it is deafening, this photograph implores its viewers to understand, protect, and promote a fundamental human right that not all are being afforded.
Food security is “a condition that exists when all people at all times are free from hunger” [2]. Food security entails access to available foods that are affordable, culturally appropriate, nutritious and safe. Theoretically, food may be available, but not accessible. It might be that certain factions deny others access to the food. This easily can happen in times of war, in societies harshly divided along gender, class, caste and ethnic lines. There might be a lack of transportation, roads, bridges, or boats – especially for use by the poor and the otherwise disenfranchised. For the poor, including the working/toiling poor, there will be times when they have to make harsh decisions regarding eating versus using their meager incomes to take care of things such as doctor’s bills or a bus ride into town.

Food insecurity occurs all over the world. However, it is most pronounced in developing countries – and especially in those where human rights are secondary to other larger goals and agendas. Historical patterns of racial, ethnic, and gender discrimination compound the situation. Despite the Malthusian contention that population increases geometrically while world capacity to give people the materials for survival increases arithmetically, changes in technologies have made it theoretically possible for all of the world’s peoples to be food secure at all times. For well over 100 years, more food has been produced all over the world than can be eaten by the world’s population in that year. All the same, food insecurity remains a constant in the lives of millions of people around the world.

Gerhard Lenski’s theory of social stratification brings understanding to the establishment and perpetuation of food insecurity. To Lenski, the systems of production and distribution of goods and services heavily influence the fates of the people within the system [3]. Technological innovations lead to higher levels of productivity; surplus emerges as a factor in the social system. With surplus comes a shift from mutual interdependence and subsistence to differential access to surplus and systems of inequality. His hypothesis correlates that an increased level of economic development, the more power plays into distribution of goods and services. When combined with further technological advances, even greater inequality exists in the society. In developing societies, however, the disparities between the wealthy and the poor are more pronounced than in industrialized societies, with long-term negative impacts disproportionately affecting the poor. Indigenous, primarily rural, groups continue to suffer gross inequalities. Women’s status is measurably low. Those disenfranchised by poverty and hierarchical social structure are vulnerable to, among other things, food insecurity.

The United Nations has outlined the “eradication of extreme hunger and poverty” as the first of the eight Millennium Development Goals. This placement reflects the pivotal role that this goal has in all aspects of human rights and improvement in the quality of life for all. As with Tanur’s lovely picture of fruit and its power to have us delve deeper, placing this goal at the top of all goals helps us move beyond the single issue and into its interface with other equally but not necessarily separable social facts.

Those most affected by food insecurity often are those most essential to food production and harvest. It is a significant reality that the people who harvested the foods photographed might not have been able to afford to buy them in a market square. Food represents the sustainability of life. The fruit's significance begs you to step back critically to imagine the unseen and bitter realities of whole cultures of people whose fundamental rights, including the right to food, are at the whim of groups, systems and social forces that can doom them or be altered and set them free.