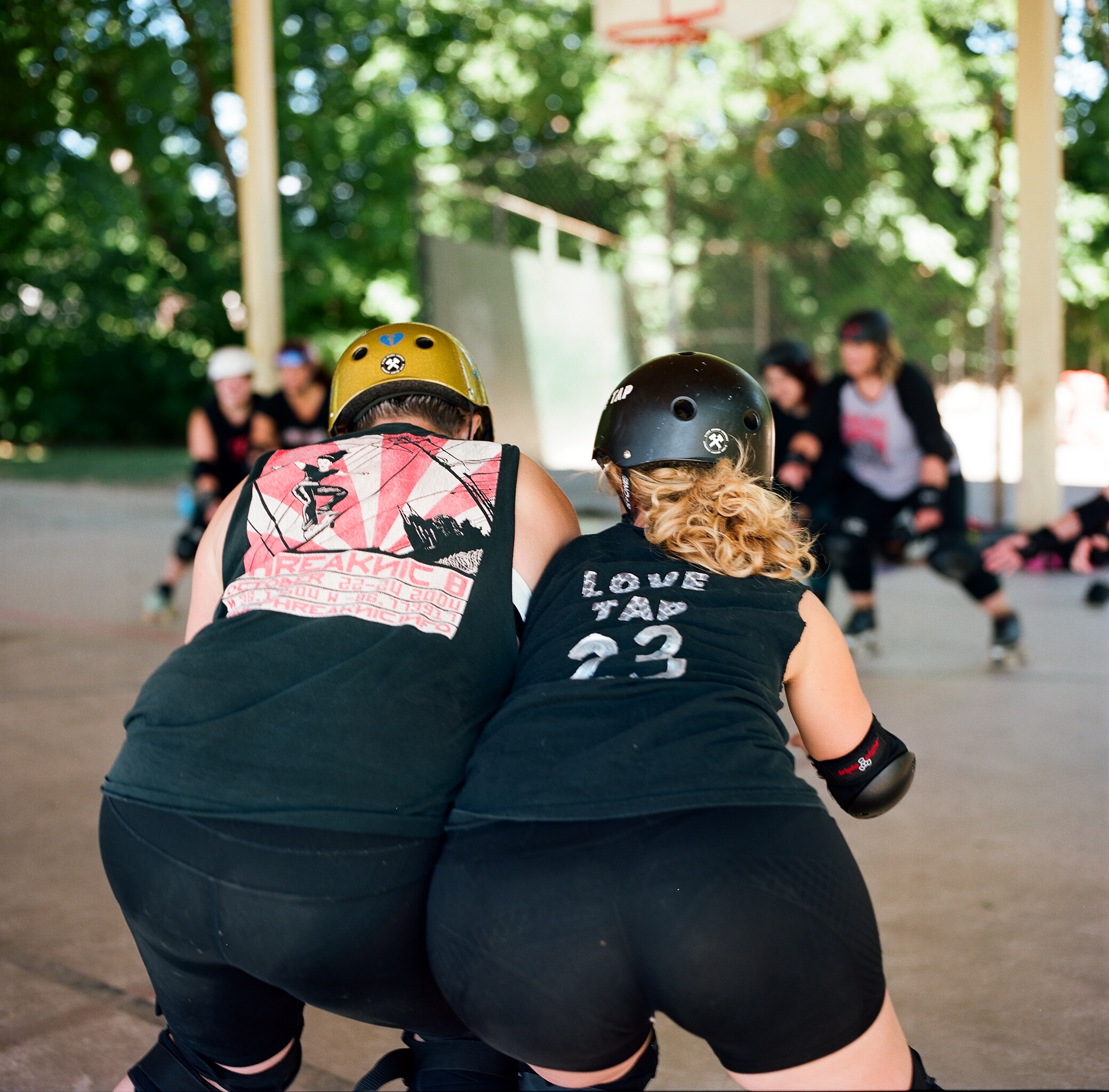 Created by women and for women, roller derby has become a space for women to reclaim taboo sexualities (Geisler 2014) and pariah femininities (Finley 2010) through performance. Besides costuming, such as through decorated helmets and jerseys or the iconic short shorts and fishnet stockings, skaters form these identities by choosing and embodying a skater name. These names are not trivial; Lee Ann Epstein writes that your skater name “is likely to stick with you for life” (2009: 156), influencing not just your confidence on the track but off it as well.

For many skaters, roller derby isn’t just a hobby. Tear O’Bite, pictured here demonstrating a block with Love Tap during a Texas Rollergirls (TXRG) Recreational League practice, explains that derby is an “all-consuming passion.” Skaters sometimes work two, three jobs in order to pay for all their own gear and travel. Derby is an effective stress-reliever for many who work emotionally taxing jobs, not just because of the sport’s physical exertion but because of its camaraderie. In order to play safely—and well—skaters have to be aware of each other’s and their own bodies at all times. Failing to do so can mean severely injuring yourself or someone else. Without that trust, you can’t play a good game. Thus, creating a strong name, which in turns strengthens you, is intrinsically tied to your relationship with your teammates. Many of the skaters created their names with the help of another skater, often during a difficult time in their lives. These names seal their identities within the league and outwards. Rail Gun settled on her name after going through a period of depression. A fellow skater told her she needed a “really strong, powerful name,” and so together they chose Rail Gun, a military grade weapon. Playing derby has continued to build her confidence and help her, as she put it, redefine herself.

Of all the moments I captured during my research with the TXRG Recreational League, this one remains a favorite. Working with a bulky medium format camera, often in less than perfect lighting conditions, meant that it was difficult to capture the skaters in motion during their practices. I instead lay in wait for moments of stillness, which allowed me to focus on the intimacy between players—their trust of each other’s and their own bodies. Shooting on film, I rarely had the chance to snap multiple frames of the same scene; additionally, I was forced to crop in camera. The framing then, of the two pairs just beyond Tear O’Bite and Love Tap’s respectively helmet-ed heads, was a coincidence of timing. Their stillness was a product of carefully placed skates, hunkered down bodies, their weight pressing into each other. As I positioned my camera, Tear O’Bite explained how vital this move was. One misplaced limb, one weak link, meant a jammer breaking through your wall, scoring a point for the opposing team. In derby, your individual strength really means nothing without collective strength. You cannot second guess yourself or your teammates when you’re racing full-speed around the track. The sport itself acts against notions of women as passive, as weak, as quiet. To play derby is to riot against the norm, to claim a space for you and for your teammates unapologetically, unafraid. 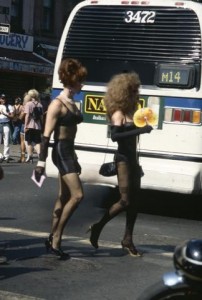 Writing about roller derby without also writing about gender and performance is almost impossible. Geisler draws comparisons between drag queens as “emblem[s] of gendered transgression” and derby skaters performing “tabooed sexualities.” Traditional drag arose during the 1980s as a “survival strategy” against marginalization, violence, and literal death. Drag houses became safe spaces for queer folks, providing care in many different forms, such as through sex education and emotional support. Although Geisler emphasizes that roller derby’s gender drag is largely different from traditional drag (and indeed, skaters are not victims of stigma on nearly the same level as drag queens and kings are), both “illustrate the possibilities of survival outside of institutional, heteronormative demands” (2014: 759). In Rachel Tanur’s photo, two drag queens stride across a populated street in broad daylight, a M14 Bus in the background. Both have heavily teased hair and are wearing all black lingerie. Their faces are angled away from the camera, as though unaware they are being photographed. Despite their intimate attire, they each carry small hand bags and one queen is caught fanning herself with a colorful paper fan. They are making the interior exterior in more ways than one, interacting with the outside world wearing clothing not only taboo because they are not gendered as female but also because lingerie is meant to be hidden. Tanur’s photograph offers little information about her subjects. As an audience, we are left to infer. We can assume that beyond Judith Butler’s concept of daily gender performativity (1988), a more explicit performance was being exhibited here. A Pride parade perhaps? Were the queens prepared to be photographed? Indeed, the frame’s composition recalls street photography and suggests that this was a candid rather than a posed shot. The surrounding photographs in Tanur’s gallery online imply that this was a parade or at the very least a gathering of drag queens. Viewing this image alone, however, makes it look as though these are two friends, merely out for a stroll, in their everyday wear. Regardless of the surrounding context, this image presents a radical narrative—one of confidence and disruption. Although drag has become more mainstream, as evidenced through the popularity of platforms such as "RuPaul’s Drag Race", and female sexuality and queer identities are more openly accepted, the importance of deconstructing gender has not faded. Butler asserts that “gender identity is a performative accomplishment compelled by social sanction and taboo” (1988: 520). Likewise, Bourdieu argues that patriarchy succeeds because it naturalizes gender roles, making us understand these roles as cemented and necessary (Chambers 2005:327). Thus, the ability of both drag queens and derby girls to “drag gender” through performance is a radical act that disrupts mainstream conceptions of what it means to be male, female, or otherwise-identifying. Bibliography Gieseler, Carly. “Derby Drag: Parodying Sexualities in the Sport of Roller Derby.” Sexualities. Vol 17, Issue 5-6, pp. 758-776. 15 August 2014. Butler, Judith. “Performative Acts and Gender Constitution: An Essay in Phenomenology and Feminist Theory.” Theatre Journal. Vol 40, No. 4, pp. 519-531. December 1988. Chambers, Claire. “Masculine domination, radical feminism and change.” Feminist Theory. Vol. 6, No. 3, pp. 325-346. 2005.