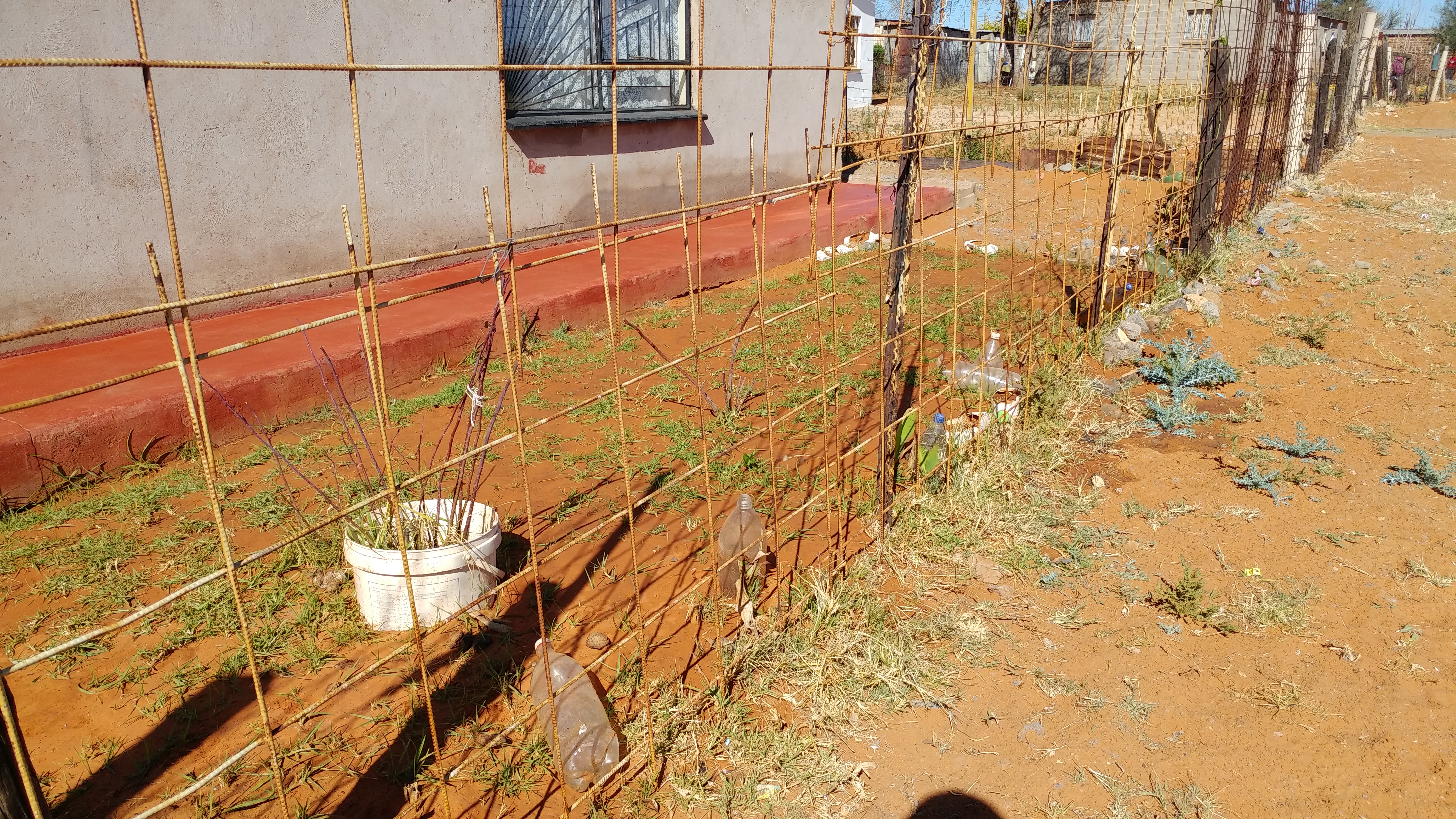 The picture is of a garden in rural Northern Cape, South Africa and I dub this picture two litre scarecrows. Bolter and Grusin (2000), Banda and Jimaima (2015) and, to a certain extent, Prior and Hengst (2010) write about semiotic remediation as repurposing. According to Irvine (2010:236), “remediation, in this sense, implies taking up some previously existing form but deploying it in a new move, with a new purpose”. The two-litre soft drink bottles placed on the grass have been repurposed to serve as scarecrows. From the uneven distribution of the grass, it can be concluded that the grass was recently planted. In a bid to ensure that animals such as chickens refrain from eating the growing grass or scratching the soil looking for bugs and insects, two-litre soft drink bottles are used to keep animals at bay. The two-litre ‘scarecrows’ are also meant to deter dogs from defecating on the grass.

In talking about the material culture of multilingualism, Aronin (2015:6) posits that “materialities and spaces are those other kinds of language which are essential and indispensable parts of the semiotic resources of multilingualism”. Two litre scarecrows is an example of how the placement of materialities can ‘speak’ or relay various messages in the ‘absence’ of written inscriptions or oral-narration. The placement of two litre soft drink on the grass is a common, unspoken practice in the Northern Cape. Consequently, the visibility of these two-litre bottles and their interpretation of their presence therefore ‘speaks’ not only to the animals, but also suggests to human beings too not to step on the growing grass.

Two litre scarecrows attest to the reality that meaning making is multimodal in nature and even psychical material artefacts such as two litre soft drink bottles contribute to a multilingual society. 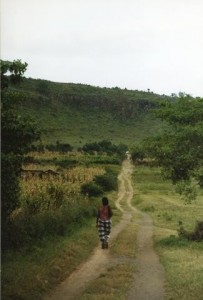 The picture of the African woman seamless navigating through space by using a footpath brings to mind the theory of Linguistic landscape (LL) and the critique thereof. Landry and Bourhis (1997:23) define LL as the "visibility and salience of languages on public and commercial signs in a given territory or region". This definition faulty implies that all regions – rural and urban have visible signs that add in the navigation of space. As evident in this picture, place-making is not centred on visible signage especially not written signage. In a bid to provide an account for place-making in rural areas, Banda and Jimaima (2015) contends that the production and consumption of signage is different for rural and urban. According to Banda and Jimaima (2015:648) “narration and navigation of place in rural areas may require additional or intricate oral input in repurposing natural objects such as trees, hills and bush paths as semiotic materials for sign and place-making”. The repurposing of natural objects for sign-making is evident in this picture. The woman draws on footpaths, trees and maize field on her left. The resources drawn on in the navigation of space in rural areas thus compel scholars to broaden the definition of LL and the scope of what is considered signage beyond the typical neon lights signage that dominates urban areas. Urry (2007:63) puts forth that “all movement involves intermittent and walking create paths that “demonstrate the accumulated imprint of journeys...people can imagine themselves treading the same paths as earlier generations…” The footpath the woman walks on is more than just a footpath – more than an illustration of the level of ‘underdevelopment’. That footpath is carved into nature yet simultaneously craved into the socio-historical background of the community due to the memories associated with it.