This photo was taken while following Skelly at a second line parade in New Orleans. These parades, hosted by neighborhood social clubs each Sunday, are part of the rich legacy and cultural heritage of African American communities in the city. Most of the action of the second line is actually happening outside the photographic frame: ahead of us, is a nine piece brass band and the hosting social club decked out in dandy-esque finery, behind us, members of Skelly’s own social club, specifically for wheelchair users. At the moment represented here however, I was transfixed by the show Skelly was producing on the sidewalk with the help of the mid-day sun. The subject is the act of mobility, captured in the wheelchair itself, Skelly’s arm jutting out into the field of vision, and his shadow looking back at us.
Skelly has used a wheelchair for almost 30 years, after a gun shot wound in 1989 partially severed his spinal cord. When the music is right, Skelly may lift himself out of his chair, scissor kick his legs, rock his chair back and forth, or leap out of it into the ground. At these second lines, I am often tasked by club members to document their wheelchair dances; for many gun shot injured residents with whom I work, the photo archive is a key part of the process of reconciling their pre and post-injury selves.
This picture operates on three registers: it is both visual ethnographic “data” and a methodological vehicle for analyzing the “techniques of the body” (Mauss 1973) and the dynamic of wheelchair specific mobility. Furthermore, it interrogates the politics of representation of the disabled body in public space, usually portrayed in passive acts. Furthermore, survivors of street gun violence, like Skelly are often portrayed as criminally responsible for their own condition, at best, “guilty victims”. What does the disabled Black body claim and contest through dance?
Mark Anthony Neal (2013) a scholar of critical race and gender studies, theorizes that “Black men are bound to and bound by their legibility” (p.6). Legibility describes how the mainstream public “reads” black men as a criminal threat, thus subject to surveillance and incarceration. Masculinities and identities outside of these formations become illegible- unknowable, even when right in front of us. The oversaturation of contemporary news media with images of Black trauma and the violence done to Black bodies compounds this legibility crisis, and renders photographic images as confining representations which bell hooks (1995) refers to as “the crucial realm of struggle” (58) in a racial politics of Black liberation.
As the anthropologist- witness, I see my own shadow in this photograph caught in the act of seeing. What did my own perspective or biases bring to this photo? As social scientists we are producers and disseminators of meaning, always engaged in these politics of representation in our research. As such our photographs can either constrain or, we hope, compose one small act towards liberation. 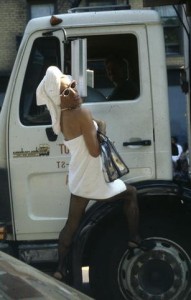 This photograph of a drag queen, titled ‘Drag Queen 1’, is one of only a few portraits, and one of even fewer posed portraits in Rachel Tanur’s collection. Here, the subject, a woman dressed provocatively in a towel wrap and stockings, locks her gaze with Tanur’s. In many of Tanur’s photos, she seems drawn to meaning making in the engagements of everyday life, at the market or the bus station. Likewise, the other drag queen photos in the gallery capture the everydayness of life within the extraordinary. This portrait stands out as compelling, electric, yet ultimately unresolved. Is this a moment stolen from the carnivalesque celebrations of New York City’s gay pride parade? Did Rachel ask her to pose or was she just standing there with her foot kicked up on the wheel just so? Were there other photographers there at the same time? It is hard not to imagine the woman featured here shouting to a spontaneous street audience, maybe to Rachel herself: “hey, look at me! Take my picture!” The pose itself frames some fascinating contradictions. The drag queen is outside but wearing inside attire; dressed in stockings, heels, and carrying a purse, her towel might unravel at any moment. Most compellingly, she stands in front of an 18wheeler truck, her stockinged leg perched on its oversized tire. Here lies the acute tension of traditional femininity and masculinity in one space. Even more curious is how upon further examination, one can see the softened shadowed silhouette of the truck driver, who appears to be amused by the scene unfolding—he may be looking at the drag queen but it appears he is engaged by the interaction between Tanur and the drag queen’s locked gazes. This photograph also engages with the spectator’s notions of gender conformity and performance. Long standing theoretical scholarship about drag queen cultural identities usually pose two different but related questions: Do drag queens reinforce traditional notions of gender through their hyper feminized dress, or are drag queens contesting and resisting hegemonic gender roles through performance, by revealing it all to be a costume one dons. “There is no gender identity behind the expressions of gender, Judith Butler (1990) asserts, “identity is performatively constituted by the very 'expressions' that are said to be its results.” ( p 25) In addition to offering a powerful gender critique, this image is connected to theoretical questions I explored in my own photo: What makes a body legible, and who is in control of that legibility? Are our familiar scripts of gender expectations, confinements, or performances as in Goffman’s ‘dramaturgical” mode of everyday life? Finally, this photo re-centers the body as a site of analysis. Many of Tanur’s photos showcase people in labor, working in markets, but here, (like at a second line parade) we are engaged in the realm of pleasure, an unbridled enjoyment and celebration of the body. Butler, Judith (1990). Gender Trouble: Feminism and the Subversion of Identity. Routledge, New York. Goffman, Erving (1956) Presentation of self in Everyday Life. Anchor Books, New York. Rupp, L. J., Shapiro, E. I., & Taylor, V. (2010). “Drag queens and drag kings: The difference gender makes”. Sexualities, 13, 275–294.