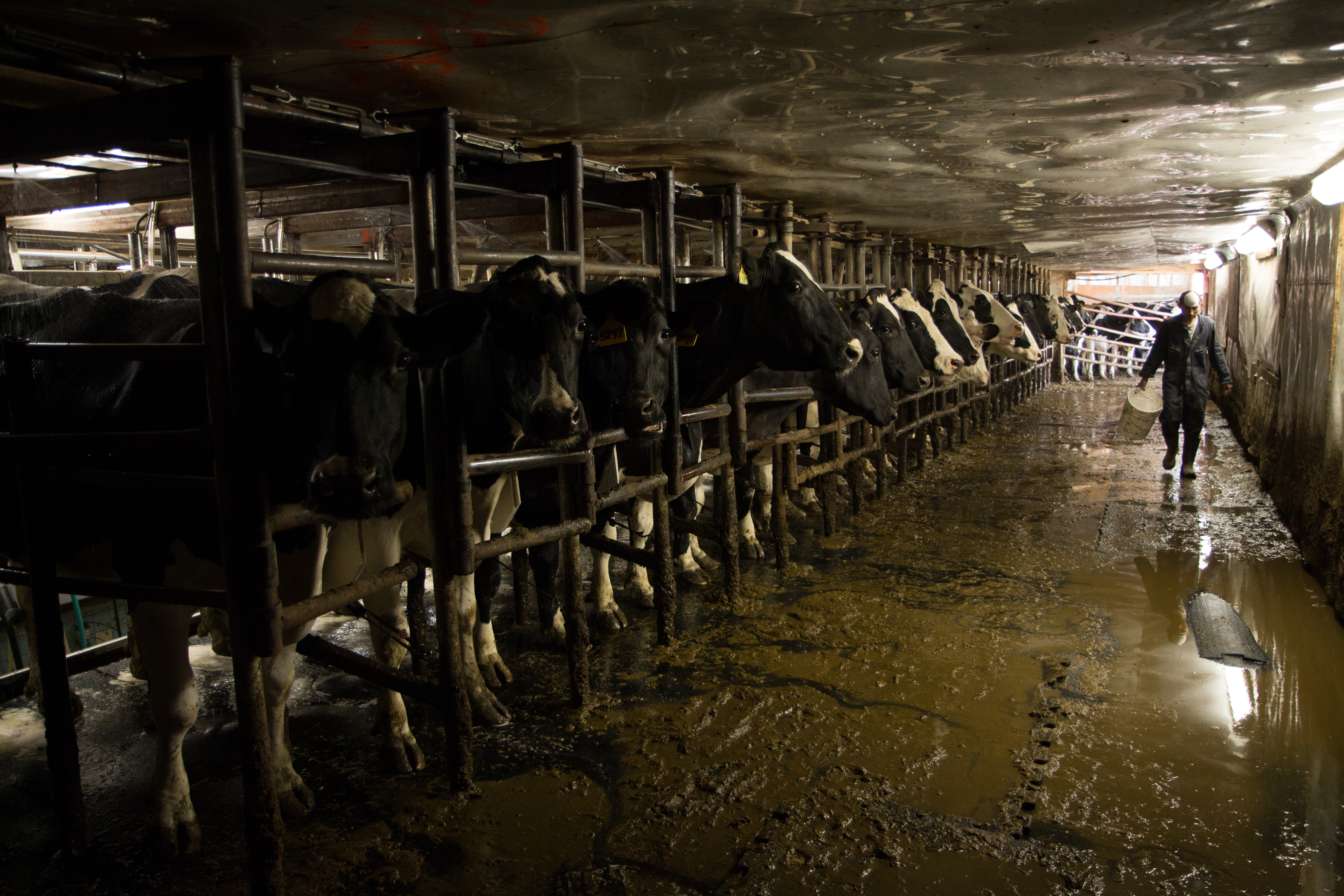 "This," the worker explains, summing up the image in front of us, "is the base material for the dairy industry." Guided by the elicitation method, we discuss my photo and its depiction of the milk production process. Sprinklers calm cows as they wait to be milked. Ray (a pseudonym), the pusher, moves swiftly about the barn, watchful as to not be kicked by the animals. He is responsible for separating cows into groups, guiding them into the parlor, and cleaning manure from their stalls. He works 13-14 hours a day, 365 days a year.

Over 1,000 workers form the backbone of Vermont’s consolidating $2.2 billion dairy industry. My previous research indicates farmworkers are one of the most exploited groups in the U.S. (Bon Appétit Management Company, United Farm Workers, & Oxfam, 2011). A 2014 survey of Vermont dairy workers designed and conducted by Migrant Justice—a worker-led human rights group based in the state—revealed that 40% of workers do not receive minimum wage, 30% work seven or more hours in a row without break, and 20% do not have access to bathrooms or water at work. Corporations exert price pressure with their domination of the market while suppliers, including precarious farmers and workers, are squeezed. Farmworkers’ experiences are part of a larger story where social, political, and economic forces intersect with race, class, and immigration status.

Consistent with Cosgrove and Daniels’s (1988) theory, duplicity of landscape, which elucidates how capital obfuscates and naturalizes conditions of production, my photo denies and disrupts a bucolic vision of Vermont. A look inside a dairy barn reveals the dissonance between the progressive state and structural marginalization within it. Challenging the notion of Vermont exceptionalism—moral rectitude and immunity to problems—this picture engages with the reality of worker exploitation, poverty, and discrimination that is ubiquitous in industrial food chains everywhere.

To understand the landscape, we must be attentive to the positions of those who labor unseen. Migrant Justice is currently implementing Milk with Dignity, a program created and enforced by the workers it aims to protect. It is a pioneering adaptation of the United Nations-lauded worker-driven social responsibility (WSR) model. Through WSR, Vermont dairy workers, primarily migrants from central and southern Mexico, seek decision-making authority to assure their right to a safe workplace, decent housing, fair wages, and a voice in supply chain policies. As Milk with Dignity forges ahead, photos are evidence that can create meaning in unfolding historical, sociological, and political circumstances (Harper, 2012).

My image speaks to profound issues underlying Migrant Justice’s struggle for change. Ray’s tucked head, hidden eyes, and reflection in a manure puddle suggest his isolation and oppression. Yet, unlike the cows’ corralled bodies, Ray treads freely. His figure exhibits agency and action. Springer (2014) calls migrants’ decisions a “revolution of the everyday where individuals become insurgents by refusing the existing structures of domination and walking their own way” (p. 260). Ray’s forward momentum symbolizes the striving for dignity of employment that is worker-led.

This picture, part of a long-term collaborative project with Migrant Justice, defies farmworkers’ invisibility. It conveys workers’ potential to transform the landscape through collective empowerment. Dairy workers tell me that labor abuse in U.S. agriculture is not inevitable. My images hint at shifts of power to come. 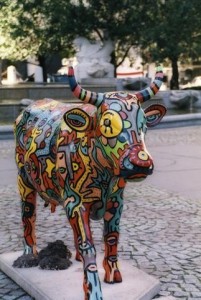 On a sunny day in 2000, Rachel Tanur photographed a brightly painted, freestanding sculpture of a cow standing on a cement base in a New York City park. The sculpture is part of cow parade, a charity initiative billed as the “world’s largest public art event.” Since 1999, Cow Parade Holdings Corporation, an American company, has enlisted 79 cities and 10,000 artists to create 5,000 cows viewed by an estimated 250 million people worldwide. The 125-pound fiberglass sculptures are mass-produced in plants in Florida and California. Artists are provided with a prototype of one of three cow forms that they decorate. Cow parades have raised over $30 million for non-profit organizations. Tanur’s photo of this life-sized, anatomically-correct cow sculpture depicts an image identical to the Holsteins’ stance in my photo within a Vermont barn. Tanur’s image and mine suggest intriguing comparisons. Like my photo, Tanur’s cow image may be obliquely commenting on how social conditions of production are appropriated and hidden. The cow parade originated in response to a public relations crisis. When Swiss banks failed to return reparation funds to Holocaust victims' families, the state decorated Zurich with cows to restore Switzerland’s pastoral alpine image. Tanur may have purposefully left people out of her composition, a possibly wry reflection of the absence of humans in idealized representations of landscape. Her image also hints at the complex realities of industrialization. The witty manure piles beneath the cow may gesture toward the grinding labor that is typically out of consumers’ consciousness. The busy patterning of the cow’s body may represent abstractions of the social, political, and economic structures that entangle within landscapes. The many eyes within the artwork may signify the vision needed to reveal invisible societal truths and ideological realities probed by visual social science methods. My personal essay asserts that we must be attentive to the positions of unseen laborers if we are to understand the landscape. This is consistent with Foucault’s (2016) construct, biopolitical sorting that elevates some people to be more worthy than others. This sorting is evident in both Tanur’s photograph and mine. Cow parade production workers and artists, just like dairy workers and farmers, are corporate vassals, subject to various techniques of control. Finally, both Tanur’s photo and mine represent different sorts of parades. In my image, Ray’s forward stride symbolizes how migrant workers disrupt the bucolic landscape through marching, rallying, and organizing other public demonstrations to “stand up for human rights.” In contrast with worker-led initiatives, the cow parade and its charity function is frozen within conventional socioeconomic structures that normalize a particular power relationship among landscape, agency, and action. Mascarenhas (2017) argues that charity, in the name of good corporate citizenship, can reproduce neoliberal forms of governance. Such voluntary efforts do not ensure fair distribution of interests, proceeds, and profits for those most in need. Thus, I contend, charity may function to obscure landscape, as it is controlled by actors whose capitalist strategies naturalize the inequitable relationships in landscape that serve their purposes. “We’re not looking for charity!” I have heard workers declare at events that advocate for binding human rights agreements with corporations. In contrast with the Vermont dairy workers, the cow parade sculptures remain in place, “on pasture,” literally and metaphorically fixed within the landscape. Foucault, M. (1985). History of Sexuality, an Introduction. Vol. 1. New York: Vintage. Mascarenhas, M. (2017). New Humanitarianism and the Crisis of Charity. Bloomington: Indiana University Press.