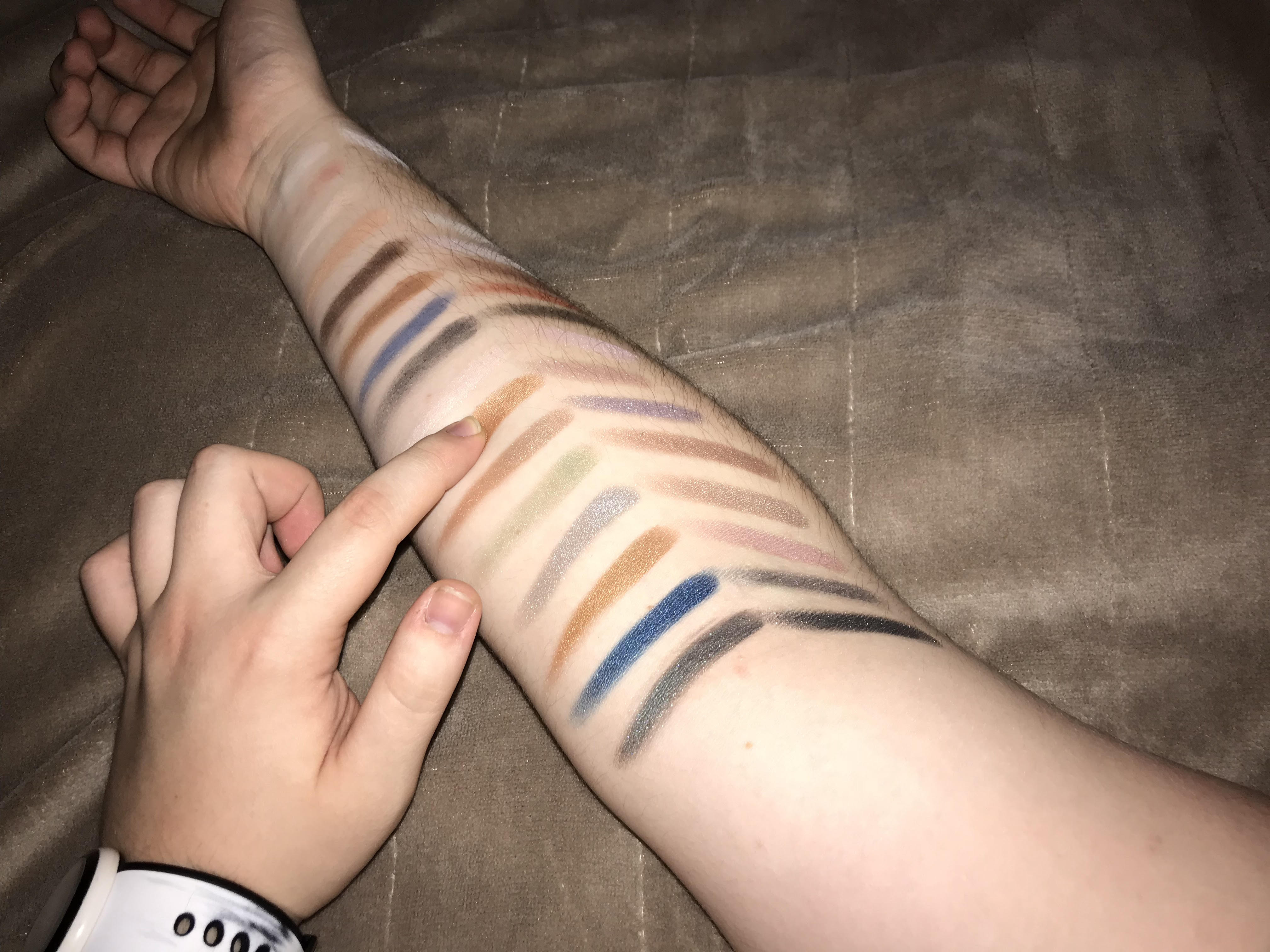 Makeup has been known and advertised towards women as something that they can use to enhance or change their existing feminine features if they choose to do so. Makeup was originally used by both men and women until the Victorian era, where the use of makeup had shifted from both men and women to primarily women. This also brought along the notion that real men don’t wear makeup. By using compositional interpretation and content analysis, the answer to the question of whether or not there is a growing acceptance of male cosmetic use will be found.

Using compositional interpretation, there are a few main aspects to this image. First, the viewer sees the hands of a person, without knowing the gender, swatching various eyeshadow colors. Another aspect to this image is the fact that the person appears to be laying on a tan blanket while the photographer is above them, using flash to capture the image. This allows the viewer to focus more on the pigments that have been applied to this person’s forearm.

The most important and prominent aspect of this image is that the viewer does not actually know what the gender of the person is without the photographer stating it in the title. This is important because it brings to light the idea that it could possibly be a male doing the swatching, which is something that is becoming more popular with the help of social media platforms such as Instagram. Along with Instagram came with it the rise of male makeup use, including drag makeup and male makeup artists.

Instagram, being a major social media platform, is believed to be the starting place for the #makeupisgenderless movement. With this movement, people want to help raise awareness and acceptance of male cosmetic use. Using content analysis and a sampling of 1 image for every 50 images, it was noticed that there was a drastic difference between genders who supported the movement on Instagram. The main code that was used was the stated gender of the person who posted an image with the hashtag. It was found that a majority of the people who posted were males or identified as transgender. Though the posts were done primarily by men, there were still some women, businesses, and those who didn’t state their gender who posted as well, though not as often.

This was an interesting pattern to find, and it relates to the photo that is being analyzed fairly well. Being the fact that the person in the image was also male, it was interesting to see that a majority of this movement’s supporters were also males. While this photo shared one main similarity, there was still one significant difference between them. On Instagram, those who posted images supporting the movement often times showed their faces with different kinds of makeup applied. In the analyzed photograph, however, the same cannot be said. The image does not show the person’s face. This is crucial to the viewer’s understanding of the image, as it encourages them to re-think the societal belief that real men don’t wear makeup.

In conclusion, I disagree with the societal belief that men can’t wear makeup. Women have the choice to emphasize their features, and I think that men should be able to too. I, as the photographer, viewer and analyzer of this image, see this image as successful in helping my understanding of whether or not there is a growing acceptance of male makeup use. When I see this image I see that it is a male’s hands that are being used to swatch the eyeshadows onto his forearm. Even though there is a long way to go, I see that there is a slowly growing societal acceptance of male cosmetic use through social media platforms such as Instagram.

When looking at Rachel Tanur’s photograph Greek Temple Newlyweds, it looks to be a simple picture of a newly married couple. However, upon closer inspection and analyzation, we can now see that there are multiple different aspects at play that possibly shows much deeper meanings within it. In order to find those meanings and answer the question of what this image could possibly represent, both compositional interpretation and semiology will be used. Compositional interpretation is a good starting point for analyzing photographs because it gives the viewer a more detailed look at what the image actually contains. The first and most prominent part of this image is the couple that is located between the two pillars. The couple is wearing black and white, which are commonly known as opposite colors. Because they are seen as opposites, they are both made significantly more visible by the other person being there. The white dress helps to bring out the black tuxedo, and the black tuxedo helps to bring out the white dress. Another main part of this photograph is the photographer’s decision to include the pillars in the foreground and the scaffolding in the background. The pillars indicate that the structure that the couple is walking around in is old and that the surrounding environments have taken their toll on it. The scaffolding, then, helps to reinforce the belief that the building is worn down. By including the scaffolding, the viewer can assume that the structure is being repaired for its preservation. Through compositional interpretation, the viewer can look closer at what the image contains. By using semiology to analyze what is contained in the image, deeper meanings can then be found. One of the first signs within this image is the couple again. The fact that they are photographed in the brightest place in the image could show that they have a bright future ahead of them. This also plays along with the vast amount of space that the viewer can see in the background of the image. That space could represent the future and the sense of hope that they could share. Another sign that is present in this image is the way in which couple interacts with each other. It looks as though the groom is embracing the bride. This embrace could tell the viewer that there is a sense of trust between the two, which could also be represented by the pillars that are located in the foreground. The scaffolding could also represent a building on and strengthening between them. In conclusion, this Rachel Tanur’s image Greek Temple Newlyweds is a great example of how a picture is worth a thousand words. Looking at this image for the first time, the viewer is able to see what the image depicts. I was led to believe that the two people shown in the photograph are a man and a woman. I believe this because people have been culturally conditioned to believe that the bride wears a white dress while the groom wears a black tuxedo. I also believe that the couple, regardless of their genders, are sharing a serene and intimate moment with one another, looking as though nobody else is around them.