Hymn to the New Life 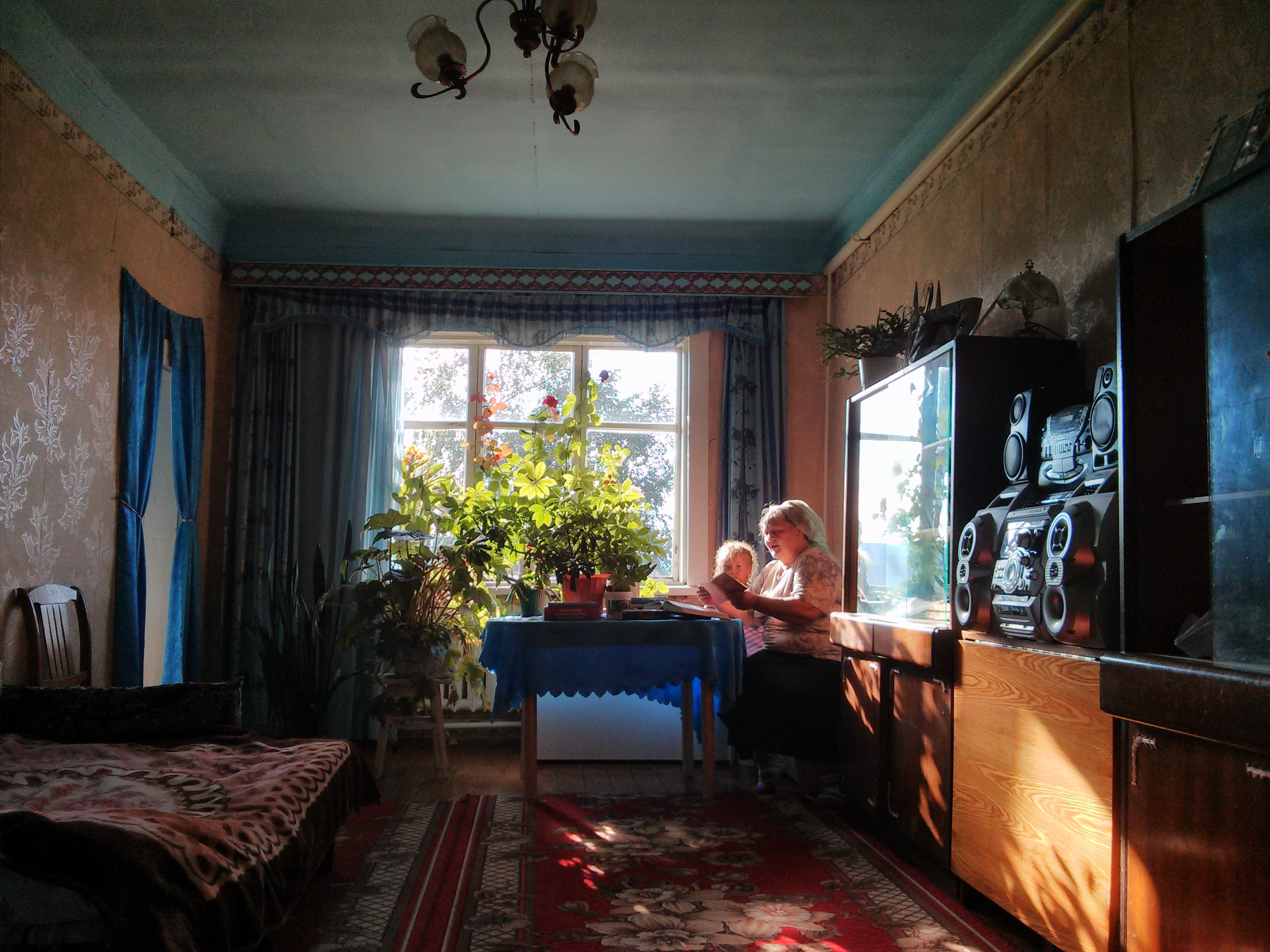 How does one compress years of research, several travels, and innumerable stories into one picture that encompasses the narrative of the place and people’s struggle with the everyday living in a precarious space? Do I bring to the attention of the living a portrait of the dead? Do I opt for a picture of childhood? Do I select a spectacular landscape or a scene where people come together laboring on their happiness: a celebration, a procession, daily chores? The scene captured in this photo is a domestic, sweet scene: in soft light, a grandmother holds a book in her hands. It appears that she reads to her granddaughter. I, the observer of the scene, a photographer with a camera, know that the grandmother does not read but sings. She sings the hymns of the Baptist church: several years prior a priest visited the village of Anosovo, Siberia, with a mission. He was going to build a church, but after some time, he departed—went back to Germany.

The village of Anosovo, Siberia, emerged as a result of the rapid processes of urbanization and industrialization that changed the face of the planet. Dispersed throughout the Russian Federation are thousands of small “city-type settlements” constructed in the second half of the twentieth century. The remarkable period of industrial upheaval resulted in mass internal migrations and relocations in response to a centrally planned economy. Camps, town, and cities sprang up almost overnight, creating a remarkable industrial geography of socialist reorganization. Following the official end of the Soviet Union in 1991, many of these towns on the industrial edgelands suffered from a drastic reduction in government support and a collapse of manufactures. These processes resulted in a population evacuation. In Anosovo, the population was around 2,000 in the 1970s, but now it is a little less than 600. The grandmother and her granddaughter no longer live in Anosovo. Last time I visited, in 2017, they were gone. 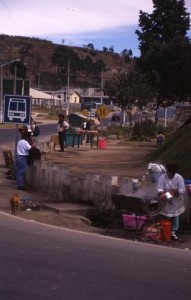 The bus stop in Guatemala, in what appears to be a rural place or the outskirts of the town depicted by Rachel Tanur, presents a scene both familiar and extraordinary. In the photograph, the familiar and the strange call one another into question. The singularity of the arrangement is preserved, although the objects and people coming together for a brief moment have long dispersed. It is a recognizable scene: people at a bus stop, waiting. The bus stop is a "nonplace": if a group forms there, it is not for a place itself but merely in order to get somewhere else. This is so perhaps for everyone except for a woman selling food. For her, it is a place of work. Thus, the same location is differently inhabited or, un-inhabited even if frequently visited. It seems like it is an evening: the dying light is illuminating the hills and buildings. The people waiting for a bus, therefore, are likely to be returning to their families—from work or from a trip to the town. Whatever their final destination is, people in the picture form a momentary community united by the fleeting solidarity of those who are caught, for long minutes, in a dull process of waiting for a bus. As we keep looking, the details begin to emerge. The seller of food holds a white mug while she is cooking food up to quick grabs. A dog walks by, not very far away from the source of appetizing smells. The dog remains near humans; the animal makes this little community “a multispecies arrangement.” The viewer encounters the scene unwrapping as depicted in countless locations throughout the world. As I am typing these lines, and the reader is making words come to life by reading them, there are people all over the planet waiting for a bus to take them where they want to be or need to go. Yet we seldom pause, even for a second, to ponder peculiarities and unrepeatability, the inconsistent consistency of the ephemeral arrangements around a bus stop, at the shop, at the market, on a park bench (some other plots of Tanur's photography). Even in a country foreign to us, during travel, the novelty of these daily experiences wears out quickly, and the traveler stops noticing things woven into the fabrics of the ordinary and the mundane. But the unusual, the fresh, and the spectacular emerges out of the density of the everyday. Stories pop up around daily entanglements, struggles, and celebrations rather than come from official grand narratives. It is hard to suspend the practices of looking one has been habituated into. It is easy to forget that we will never see this exact little world again for it will disperse in a minute. It takes an effort or an event, to disentangle oneself from a flow that allows us to keep omitting things. Photography can be an event disrupting a continuity. Photography forces us into seeing. In a split second, a photograph pushes the viewer to recognize what makes a daily experience an unrepeatable agglomeration of colors, textures, shapes, forms, and rhythms. Splashes of pink—the plastic basin and the object in the background—compose a visual rhyme. A hat and attire of the man “playing himself” in his daily life stop the gaze and beget all these questions about ordinary life that we have no way of knowing but wish we knew: what is his profession? How old is he? What is his childhood’s dearest memory? What did his mother tell him last time she saw him? Where is he going? Where is he now? Every detail comes to live, vibrant and significant. Even a sign with a white drawing of a bus in the blue square acquires a sense within a composition. The sign is marking the space, in fact, it is making the place the bus stop, for the participants of the scene and for a non-present viewer engaging in the delayed “participant observation” on a great distance, of space and time. A castellated fence is reminiscing of medieval fortresses. The sun goes down.