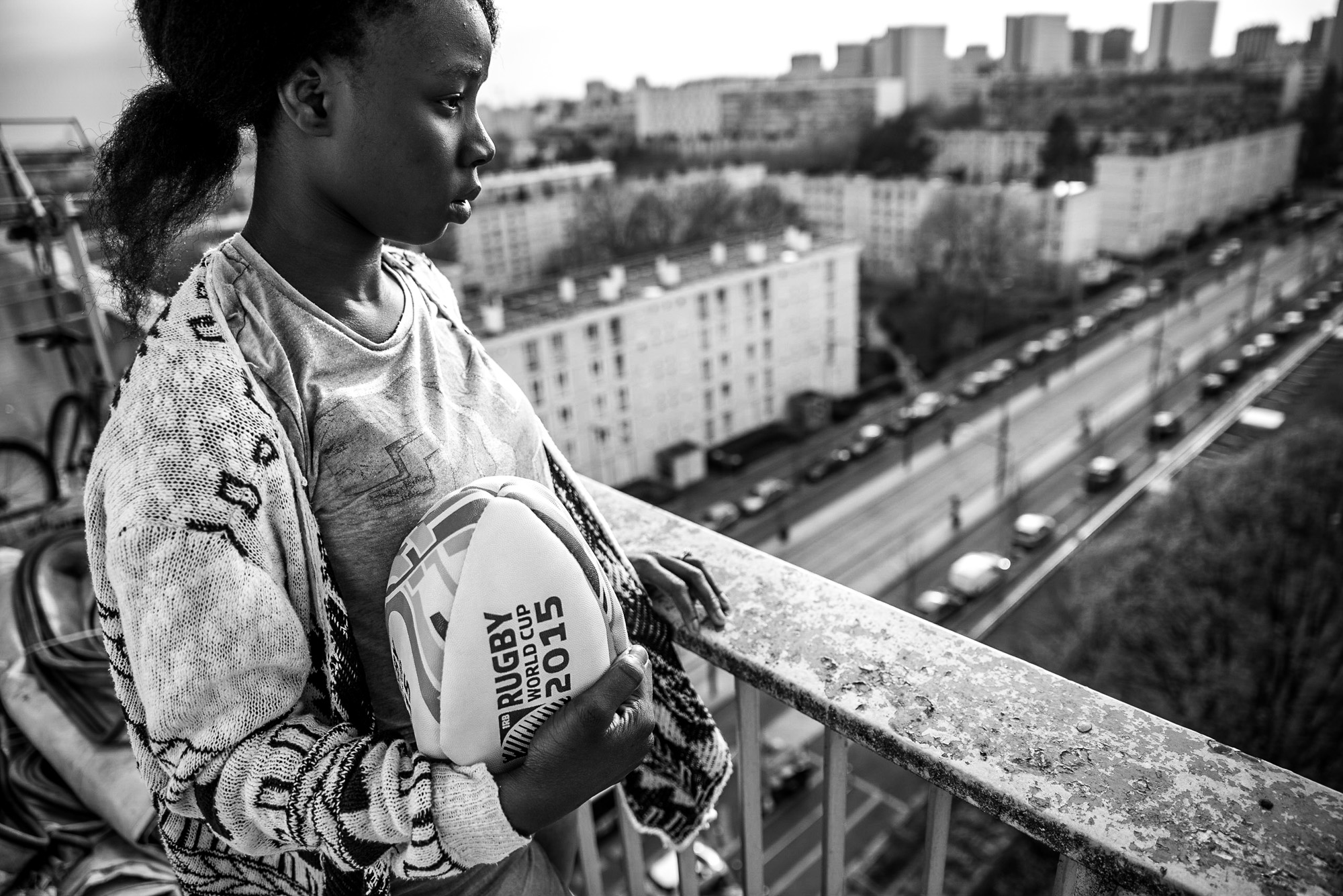 Koumba looks at the horizon from the balcony of her apartment. In the background, we see the social housing buildings of Sarcelles, France. The aesthetic construction of the image (black and white postproduction, wide angle, highly contrasted, wide aperture) reveals the intention of the image: create a phenomenological narrative of the ordinary experience of this young woman.
In November 2016 I started following Koumba, a rugby player from Chantereine High School in Sarcelles, a marginalized "banlieue" in the north of Paris. "Banlieue" is a French word to designate a suburb. It is composed of by the words "-lieu" (place) and "ban-" (external). Somehow the "banlieues" are the "banned places," often socially and politically dismissed by the State.
Last year the Chantereine Team was one of the best newcomer teams in the country. The team was part of a project called "20 rugbywomen sarcelloises." The main goal was to use rugby as a way to limit dropout rates. In fact, Sarcelles has one of the highest school dropout rates in the country. By virtue of this project, all the participants obtained their "brevet" (high school diploma).
Koumba, 16, lives in a social housing tower. Her father is retired and he suffers from a chronic illness. Her mother works as a housekeeper in Paris. Both are Malian immigrants who arrived in France 30 years ago. Koumba has lived her whole life in Sarcelles.

Before Koumba joined Chantereine, she risked being expelled from school for bad behavior. In 2013 she started playing rugby. Since then, rugby has been an empowering medium to overcome difficulties and gain confidence. Today she is one of the best players on the team. As a result, in September 2017 she was selected to join the USAP, a specialized and highly competitive rugby training center based in Perpignan. Since then, she has been training in the USAP in order to join the French Women's Rugby Team.

This photograph is part of a larger ethnographic fieldwork (2015-2018). I used photography as a method to study gender from a reflexive, embodied and engaged ethnographic practice (Leon-Quijano, 2017). Visual practices were collaborative moments in which we were able to describe, observe, but most important, re-create new narratives of "place" by deconstructing together the gendered structures of urban spaces. Rugby, was a bridge to understand the girls' daily life and to "depict" rather than to "represent" (Taylor, 1991), the simple experience of being a rugby player
In visual ethnography, methodological and epistemological issues regarding the use of photography in ethnographic research, have been regularly acknowledged (i.e. Becker, 1974; Collier and Collier, 1986). In the vein of phenomenological and sensory approaches (i.e. Pink, 2015; Cox, Rupert, Irving, Wright. 2015), I studied the urban construction of gender through collaborative methods. I endorsed critical pedagogy (i.e Freire 2012) and participatory action research (Fals-Borda 1991; McIntyre 2008), to explore techniques which use photography as a way to describe and (de)construct subjective narratives of gendered experience in urban settings. As a "constitutive element of social relationships based on perceived differences between the sexes" (Scott 1986, 1067) gender not only "acts" in the visible, concrete and observational dimension of perception. It acts in a "monade" and "montage" system (cf. Didi-Huberman, 2014) in which urban practices are marked by sensed, imagined and gendered experiences. In that sense, photography has been a creative tool to reveal the "hidden and silent" action of gender. In consequence, an aesthetic and creative engagement with photography may be an empowering tool to re-imagine the experience of people living in marginalized cities through creative ethnographic practices. 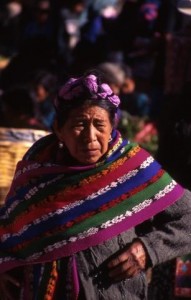 "What are the camera's special assets that make photography of great value to anthropology?" (Collier and Collier, 1986: 9) Rachel Tanur's photograph shows a Guatemalan woman, in a public place, probably in a market. In the middle of the frame an aged woman, possibly an aboriginal woman, dressed in traditional clothes. The "visual message method" (Joly, 2008), allows me to decompose the photograph in order to analyze its ethnographic meaning. The plastic message describes the way the image was constructed. The first plastic characteristic of the photograph is the vertical framing. The vertical frame forces us to concentrate our view on the aged woman. The reduced depth of field and the use of a standard or telephoto lens, isolates the main subject from the social environment in which the image was taken. Consequently, the photographer forces us to analyze the details of the main character. The central presence of a Guatemalan woman in the middle of the frame is revived by the presence of a reduced depth of field (DOP that blurs the subjects that are behind the woman). We can distinguish some elements of the context (a group of people, a handmade basket), however our sight is directed to the woman's face. As Erving Goffman did forty years ago in Gender Advertisement (1979), the ethnographer is forced to analyze meticulously the characteristics of the actors. Her physiognomy, the way she dresses and the way she keeps her body show us some "ethnographic characteristics" of the actor. The visible left hand gives us information about the kind of job she realizes ordinarily (probably manual tasks). Rachel's photo isolates the main subject by reducing the depth of field. Therefore, we can see clearly the ornamental details of the Guatemalan woman: the way her hair is arranged, the use of earrings, the external "dressing code" based on a colorful garment and an internal coat. The photograph of Rachel Tanur has ethnographic and documentary value as she describes the social world of a specific community by combining different aspects of Guatemalan life (cf. the photographs Guatemalan Clothesline, Guatemalan Communal Laundry, Guatemalan Houses, Guatemalan Farmland, Guatemalan Bus Stop) with a close view of people (portraits of Guatemalan Men and Women). This photograph explores the complexity of social life by describing ethno-methodologically the characteristics of locals: the image allows us to discover some of the main characteristics of the person, in particular her dressing code and other physical features. Thereby, Rachel's photograph may help to answer the question formulated by John and Malcolm Collier at the beginning of Visual Anthropology: the camera, and more widely photography, is value to ethnography because it allow us to understand, by using a nonverbal language, the specificities of social life by engaging new understandings of social interactions. References Collier, J., & Collier, M. (1986). Visual Anthropology: Photography As a Research Method (Rev Exp). Albuquerque: University of New Mexico Press. Joly, M. (2009). Introduction à l'analyse de l'image. (F. Vanoye, Ed.). Paris, France: A. Colin, DL 2009. Goffman, E. (1979). Gender advertisements. Cambridge, MA, France: Harvard University press.