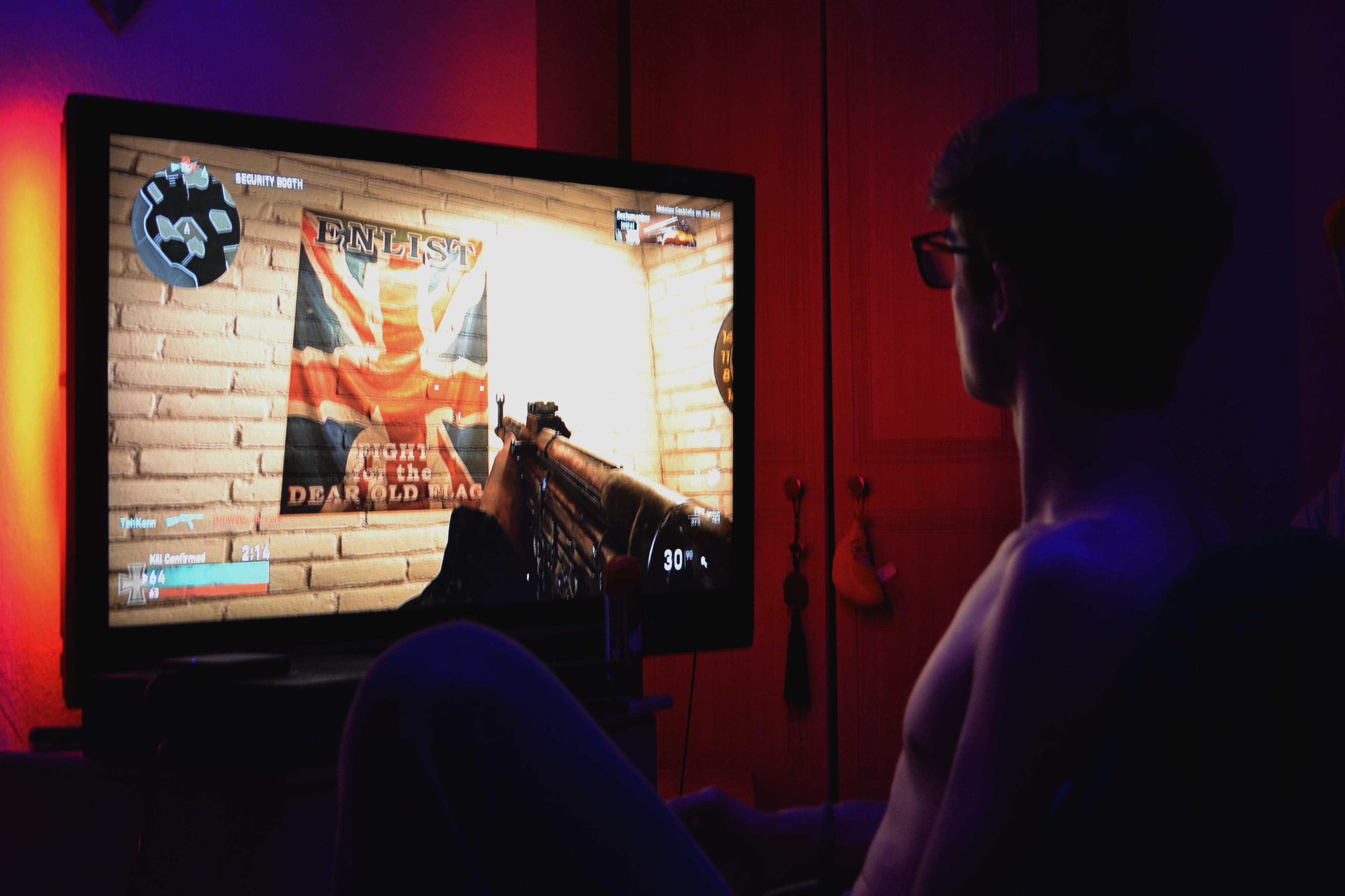 In this picture, one can observe a casual image for most of our generation: a young person playing video games. More specifically, a war game where he is, by luck, on the side of the Nazis. At this point of the games he and his team are attacking an English base. The aim for him and his co-players is simply to win, no matter what side they are in and no matter what the ethical concerns created later on are.
This sounds like something one could characterize as “first world problem” but if we analyse it deeper, it really is not. In one of the new war games, players can play at the side of the Nazis. It is not their choice as they are randomly put into teams. This means, that if you are on the side of the Nazis and you win, you and your team will be satisfied by winning on the side of the ones that were objectively the “baddies. Multiple games, including this particular one have been accused for promoting violence. This time though it is different as the game was accused for promoting the Nazi ideology. The problem here of course does not lie in the game itself. It lies on the fact that our generation is having no ability to critically know what is acceptable just in the virtual world and what is acceptable in the real world.
In western societies, we want to believe that we know a lot about the WWII but truth is, most of the new generation has minor knowledge about the events and the crimes committed during it. This is the same generation that fanatically plays these types of games. We also live at times that the far right and neo Nazism are on the rise again. The social, the refugee and the financial crisis around Europe create the perfect circumstances for the rise of these groups and hate crimes as well. These type of circumstances are incredibly similar to the ones before WWII that also lead to it. Furthermore, historical and political education is not provided in detail by any educational system leading the new generation to a lack of interest in the world, society and politics. This way, the new generation is unable to see history repeating itself and the mistakes of the past occurring again at the moment.
I ask my friend what he thinks and he tells me that it is just a game. Also, for the most, playing with the Nazis is even better as they have the best equipment and the coolest uniforms. That creates many concerns. It shows that our generation is apathetic, has minor knowledge in history, does not look deeper into things but just focuses on the epiphany. When you can be a Nazi and be proud about it in a virtual reality, what stops you from being one in the real life? What are the boundaries between a fake reality and the actual one? 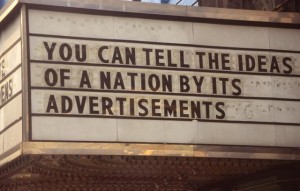 On this picture one can observe the timeless phrase “you can tell the ideas of a nation by its advertisements”. This notion is true and one can see it by exploring the different types of advertisements and the ways they have changed over time. Advertisements perfectly reflect a society as they present its cultural norms, ideas on family, race, gender and consuming. First of all, the advertisements of the past are characterised by racism and sexism. During the first 50 years of the 20th century and even later than this, it was socially acceptable to consider females and ethnic minorities as inferior. Back then, these two categories had a diminished amount of rights than the rest of the population and this was obvious through the media of the times. If we look at posters from that point of history when it comes to women we will see the usage of phrases such as “even a woman can open it”, for a ketchup can ad. “Keep her where she belongs” for a shoe ad. “It is always nice to have a girl around” for another shoe ad and more. This could sound ridiculous to us but it was a reality for women back then. They were considered weak, insecure, and totally depended on their male partners. This occurred because males were the only ones providing their families with an income as females had no rights in the working area and no political rights either. Their main job was to keep the household and take care of their kids and partners. When it comes to ethnic minorities, one can observe many disturbing ads as well. Posters back then used to present African Americans mostly as servants to the whites. For example posters of “Aunt Vermina” show an African American lady as the servant of a house where a white family lives. Also, a poster from “Pearls soap” showed the image of a white kid washing an African American kid with this soap. After the bath the kid turned white, showing how "good" the soap cleans. It sounds irrational and offensive to us but then things were different as the societal norms had doomed minorities in leaving with zero respect in multiple levels. Nowadays with the existence of laws, regulations and restrictions, ads are politically correct. This happened as anti racism and feminism raised as ideologies and promoted equality. So, what can we see through the advertisements of our days? First we can observe the ideas of beauty both for males and females. Curvy, long haired females and muscular men are in every single beauty product ad showing the socially acceptable beauty image. Another fact is the perfect family. In adverts for family products one can rarely see gay couples or single parent families. This occurs as the nuclear type is the societal idea of what family is. Last but not least, the obsession for consuming is also clear. During Christmas, black Friday and sales the public gets bombed by advertisements of useless products. This shows how addicted to consuming population is in our times.