Venezuela is internationally known as a “Factory of Queens” for the Miss Universe, the most important female beauty contest in the world. This beauty pageant represents a hegemonic, transversal, and gendered construction of the female body in the socialist country. Such a construction is reproduced in media outlets and has multiple subjective appropriations. This aesthetic discourse calls for a sexualization of women through a performance of “spectacular femininity” (Ochoa, 2014) that entails to be “glamorous like a queen.” The need of glamour, thus, takes women to a path in which moral domination of makeup, clothing, and plastic surgery, is part of being a “beautiful Venezuelan.”

Between 2012 and 2017, I have photographed the most precarious conditions of the Venezuelan socialist economy highlighting the dignity of the struggle and suffering of a nation facing imperialism (Moncrieff, 2018). That is how I met Estrella in a garbage dump in Ciudad Guayana while I was conducting interviews as part of my anthropological work at a research center in Caracas. She was a 60-year-old indigenous woman who barely spoke Spanish. Estrella worked there as a waste picker salvaging copper and aluminum. Like other Venezuelan women, Estrella felt herself beautiful and wanted me to notice it in multiple ways. She was the grandmother of my interpreter of the Warao language, and we developed a close relationship for a few months. In our daily conversations, we talked about the “ugliness” of women in the city. What Estrella told me, actually challenged the aesthetic mainstream of the urban middle class to which I belonged, as well as the symbolic goods of Venezuelan beauty, historically dominated by “white” women.

One day, under a searing sun, suffocated by the high temperatures (approximately 104 °F) and the burning of solid waste, Estrella asked me to take a picture of her while I was coughing. She said, “I want to look pretty, like a Miss Venezuela.” The meaning of what she told me is that, despite the harsh conditions in which she lived, she was, indeed, beautiful. Moreover, she modeled as if she was a beauty queen in a contest but wearing Warao clothes and jewelry. She brought this outfit to Ciudad Guayana after several days of traveling on the Orinoco River from her community in Delta Amacuro (87 miles away). She died years later due to a respiratory illness. Her motto was, until her very last day, “Beauty is never lost.”

Estrella makes me to reflect on Freund’s (1980) criticism of photographic practice as a vehicle of power relations in a society. Societal power relations, thus, intruded my connection with her, given my disruptive presence as an ethnographer-photographer. Estrella’s performance, creatively articulated the so-called “spectacular femininity.” Her claim to beauty, given her Warao origins, communicates a message of resistance beyond material deprivation, but, simultaneously, a symbolic subordination to the need to be a beauty queen.

Visual sociology opens a way to rethink these complexities, distinct from the mere documentation. It allows us to build a social fact from the visual -that is, what a fact contextually means in its visualization, and what is communicated for what is visible. This allows me to visually understand the dignity of Estrella’s beauty as a dynamic form of belonging to the contradictions of socialist Venezuela. Furthermore, postcolonial criticism can help us to understand our social existence vis-à-vis our ethnicity, race, class, gender identity, and, last but not least, our nationality. 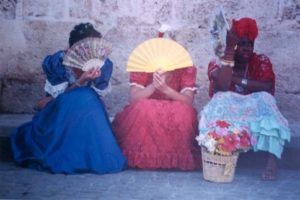 According to Wright-Mills (1959), sociological imagination is the faculty that allows the personal experience to be related to a social context. With this in mind, I wondered if it would be possible to sociologically imagine the visual work of a third party. I propose the analysis of the documentary material of colleague Rachel Tanur and, more specifically, her photograph "Cuban Fan Ladies". I considered this exercise as an opportunity for extempore visual analysis, as argued by Collier Jr. (1995: 235): “It is important to recognize that the research opportunity afforded by the camera record has allowed us to consider, often for the first time, materials either too complex or too baffling in relationships for the human mind-eye to encompass”

Tanur's photography focuses on the "Cuban reality" because it represents a complex relationship between the photographer, her photography and the photographed ones. If from point of view of the interpreter, an image contains political, moral or aesthetic reasons as explained by Joly (2002), for visual sociology this implies looking from the perspective of the sociologist with his theories, concepts, and tools as Becker (1995) argues. In this sense, I consider that the symbology of "Cuban Fan Ladies" can be represented as an "ethnographic relationship", because it is not only a question of who is looked at but also about the researcher who is granted the "power to look." It is necessary to understand in its “framing” both the performance of the photographed subjects, their “role-playing” as Goffman argues, as well as the photographer's involvement considering class, gender, race, nationality.

Tanur's photographic strategy takes advantage of unprecedented opportunities in the field because it uses a "random register" that allows it to capture social situations that are not anticipatable or repeatable (Sorenson & Jablonko, 1995). The stage seems to be an important event, such as a religious ceremony considering the fineness of the lace dresses, fans, bracelets and rings of the three seated women, racially diverse product of the colonial history of Cuba. From the female eye of Tanur, this photograph breaks with the racist representations of Cuban women anchored in the urban imaginary. As Egüez Guevara (2015) points out, in the visual narrative of nineteenth-century painting, distinguished white women were portrayed in "respectable places" such as the theaters in Havana; while the "mulatas" became mythical beings in front of the "male eye of the European artist" and, therefore, were represented as prostitutes wandering around any street.
The expressions of the photographed women, who cover their faces with the fans, show the surprise reaction to Tanur's lens, which can be explored in terms of visual research (Harper, 2012). On the other hand, the only woman who does not cover herself has a disparate dress design and is the one who shows her bare feet in the shot. In this sense, it is worth asking how the American white photographer was visualized by these three women in some corners of the Caribbean socialist island.