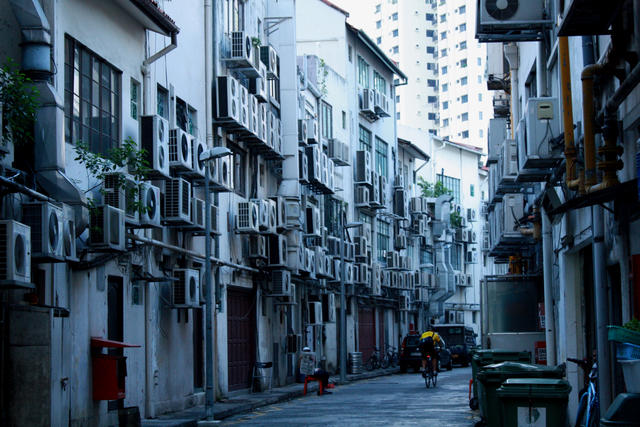 "Man and modernization in an alley"

In an alley behind a line of pubs nestled in the heart of the Central Business District of Singapore, a lone man sits. Seated on his plastic red throne amidst the incessant hum of the copious amount of air conditioning units, he retreats from the world into his hour of solitude. Outside, the world goes roaring on by. In his hands, the day’s newspapers.

Indeed, the hard-pressed need to stay ‘relevant’ to the rest of society is evident everywhere, even in the figure of the individual seemingly seeking refuge from the business district only a stone’s throw away. Even in his moment of rest, he is still one with the world outside, connected by the newspapers in his hands. This very man also embodies the neat juxtaposition of the old and the new, with the old accessorizing itself to pass off as contemporary. Here we see the man, not young himself, seated on an old plastic red chair. The old buildings are fitted with modern glass windows while their wooden shutter doors remain. In the background, the looming silhouette of a skyscraper, a corporate giant in its literal sense. And all along the alley, there are a near-ridiculous number of air conditioning units.

Why would a little building need so many units? This very question many viewers might ask belies the ripples of modernisation that have touched the alley. With the rise of modernisation, the ability of one to consume has become an indication of one’s social status. The consumer culture drives the individual to move beyond consumption of basic needs to luxury goods and technological innovations. Not stopping at only being able to consume greatly, many are also compelled to show how greatly one can consume. This conspicuous consumption drives the mass production and in turn mass consumption of many commodities. This way, the cycle feeds itself and continues to grow, making it easy for individuals to allow the consumer culture to trump logic. If only the richer can afford to live in an air-conditioned environment, the installation of more units must display a higher and therefore better social class, even if it might be unnecessary and illogical. Albeit grossly simplified, many can succumb to this line of reasoning the consumer culture provides.

Not only illogical, mass consumption also further aggravates the tension between the economic growth it generates and environmental concerns. Captured in the business district, the air conditioning units along the alley are each attached to an office. And with every small alley like this one, there are many more tall office buildings with even more air conditioning units – it requires little imagination to consider what damage maintaining a cool office environment alone can incur on the environment. This detrimental effect seems inherent in today’s economic system, from the pollution caused by energy production to the clearing of forests for paper and wood.

The formulation of policies like the United Nations Framework Convention on Climate Change are heartening efforts to alleviate the problem. However, the nature of the economy still encourages many to stay within its paradigm, as evident in the alteration of the Kyoto Protocol’s original intentions or even the refusal of some nations to join. Environmental degradation still persists globally. Evidently, governmental policies alone are insufficient at correcting the problem and many of them focus on correcting the system of production. Perhaps then, the solution would be to change the system of consumption rather than production and therein lies the call to action for all of us. Perhaps now would be the time where we look to other concerns other than economical ones and step out of the consumer culture. Instead, we turn our crave for more to environmental and cultural concerns, where the old will no longer feel the need to deny its past to keep up with the new.

Like the man on the bicycle in the photograph, where will we go? Where will our past actions lead us to? Are we on a road that ultimately leads to our own destruction or can we still turn around? While it might remain uncertain, we as actors in our social and economic systems have a stake and a say in what waits for us in the future. 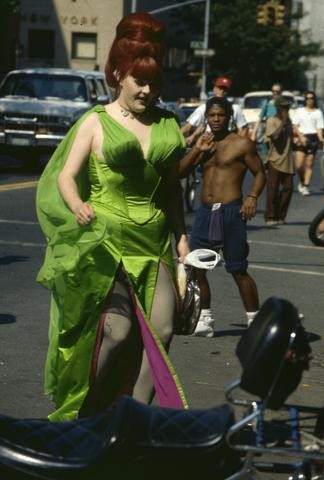 Within the city faintly recognized as New York in the background, sits a concentrated intersection of people of different identities – cultural, racial and even sexual. It is hard to miss the flamboyant character in the foreground and it is easy to guess why Tanur chose to focus her photograph on this individual. The fact that he dons a brilliant green dress is deceivingly obvious – the true phenomenon of gender socialization that lies beneath this single instance proves richer and more captivating to sociologists.

From a young age, girls are taught to play with dolls while boys with guns. This is usually in accordance to the way their parents were brought up, as well as their parents’ parents and so on. With most of us abiding by the social norms within the social structures we interact within, children are taught and thus differentially socialized to behave and acquire tastes only specific to their gender roles – as a man or woman. This assignment of gender roles is further solidified through a child’s social learning where he is punished or rewarded for specific behaviours. Having been brought up in this existing system, the child will eventually internalize these norms and further reinforce them through his own behaviour and subsequent rearing of his offspring. This social reproduction of reality will thus perpetuate through future generations.

This serves to explain why the surface of lesbian, gays, bisexuals and transsexuals was first frowned upon as deviance from a social norm. While alternative gender lifestyles have persisted through the ages, it was only in the previous century that communities formed and gained public interest. Once set apart something different and displeasing, behaviour straying from the typical heterosexual behaviour became labelled as ‘deviance’. Interestingly, it was the very act of labelling such behaviour as deviance that innervated its actors to proliferate such behaviour. According to labelling theory, actors labelled as deviant would eventually identify with the stigma and are subsequently driven to fulfil our expectations of them. Also, the labelling of individuals facilitates their association with others similarly labelled and this association encourages them to perpetuate their ‘deviance’, together. Indeed, the formal labelling of transvestism as deviance from gender norms and its subsequent perpetuation is best summed up by an excerpt from Feinbloom’s Transvestites and Transsexuals. In a letter, a transsexual comments:

“...inner conflict leaves little energy for interaction with others... it is easier to get some attention and satisfaction as a flamboyant and fascinating freak than to try and relate to other people as a full human person... On the other hand, our "normal" person, by favouring curiosity over repulsion, can easily accept our "abnormal" human being -- as a freak. It is a miniature social contract.”

When transsexuals can be accepted only as freaks or otherwise rejected as a normal person, it leaves them little choice. In fact, there are transsexual communities that even exploit society’s labelling as ‘freaks’. The hijras in India hinge upon the strange captivation they hold over society to earn their keep. They boldly demand money along the streets or at ceremonies and many oblige for fear of being mystically cursed by the hijra or even having him expose his genitals.

Where the terms ‘sex’ and ‘gender’ were once synonymous, we find in today a growing separation between the two that sets them as distinct. West and Zimmerman drive this distinction home by defining sex as ‘a determination made through the application of socially agreed upon biological criteria’ while gender is defined as ‘the activity of managing situated conduct in light of normative conceptions of attitudes and activities appropriate for one’s sex category’ i.e. male or female. It is worth noting that even in this attempt to distinguish between the two, gender is still defined in terms of sex. Would this not then create an a priori notion necessitating that it is natural for gender and sexual identities to remain congruent, since the determinate nature of sex is embodied in the very definition of gender? Perhaps then it might help to further enhance the separation between the two, maintaining the close relation between them but yet still addressing them as two independently distinct concepts. Maybe only then can we remove ourselves from our current frames of mind and move beyond gawking in morbid fascination like the man in the background of this scene.