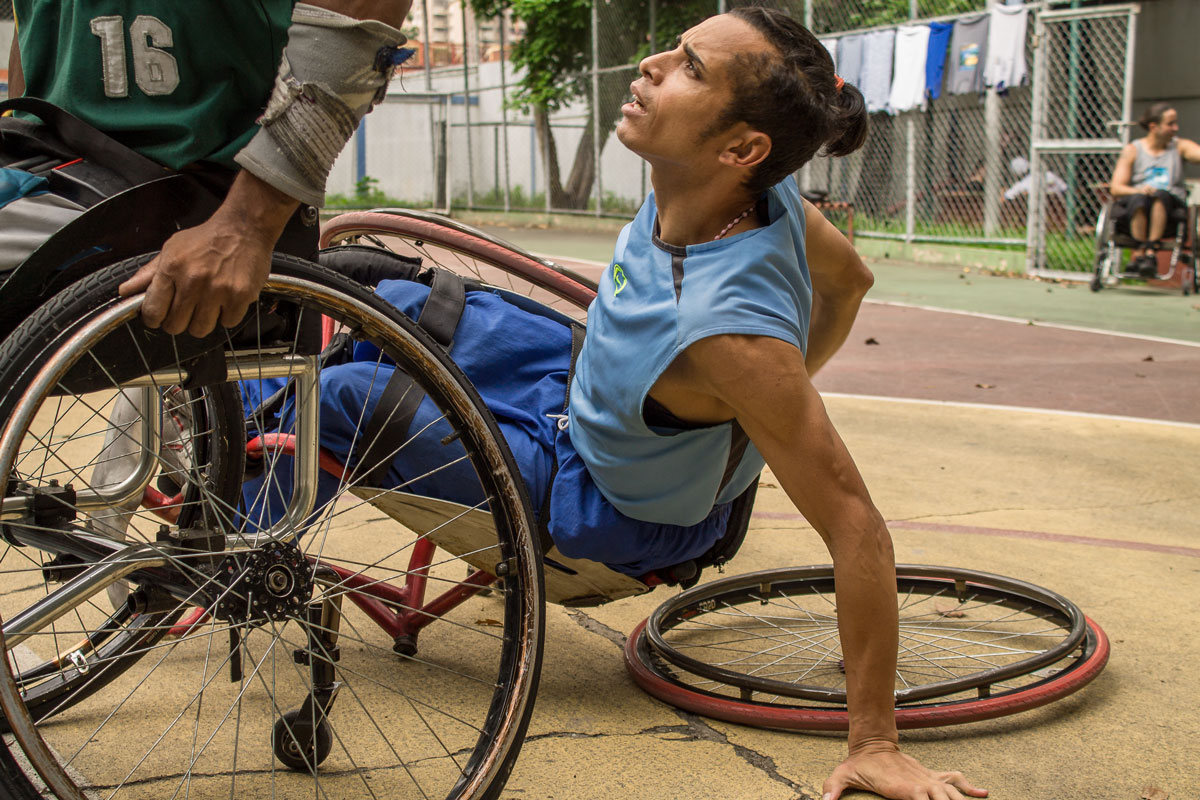 I remember the ‘crack’ and then the deep and painful scream; the metal of the chair squeaking across the basketball court. He was lying on the floor. Then he tried to grab the chair’s back wheel. I remember that nobody stopped the game, they continued as if nothing happened.

When I first met Enrique I left my camera. This is one of the most beautiful things that photography and the social sciences have in common, we need to be present with people and get to know their lives before we jump into questions or taking pictures. Photography itself is meaningless unless our relationship with the person in the picture sustains it [1].

I remember Enrique’s efforts to get up off the floor. It was a fight, the same fight that he engages in every day. If for the able-bodied Venezuela is a country where rights are consistently violated, those of the wounded seem to be nonexistent. No one talks about those who have suffered the brunt of structural violence and have to live with what remains every day [2]. There, in that negation of their subjectivities, I consider that photography has a privileged position in the sociology giving us the opportunity to choose how we can represent social issues with an image.

I don’t remember the precise moment when I decided to take the picture. It wasn’t a rational choice but a spontaneous act. I was pretty close to him, but he did not allow me to help. Why did no one help him? Was he feeling as vulnerable as I believe that he was?

I took this picture three years ago, while I was doing fieldwork in Caracas, Venezuela, registering the impact of armed violence on the most vulnerable people. I went to the “Pérez Carreño Hospital”, the only hospital in a city devastated by a humanitarian crisis that still has some resources to help those wounded and disabled by armed violence, spine disease, and traumatic accidents.

When I showed the picture to Enrique, he respond “Coño” (Fuck!). He took a moment to contemplate the picture, then he said: "I need a better wheelchair". In photography there’s a common saying about the “photographic moment” when you, as a photographer, shoot no matter what in order to get a memorable image; but through the lens of the social sciences and visual sociology I consider that the photographic moment happened while Enrique was seeing his own image and starting to think that he needs to have better conditions, he, his wheelchair; where violence is naturalized , taking a moment to observe that we deserve is important for reconstructing agency and resilience. That moment was grounded in the photographic moment; the moment between him, the picture, me, the basketball court, and all the men in the surrounding the scene. 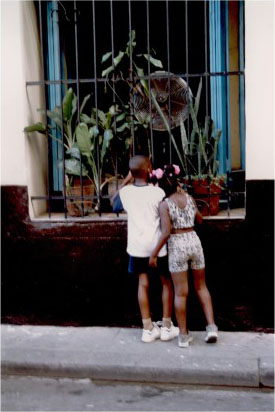 Each photograph, like every interpretation of reality, is always unfinished, an incomplete process that needs dialogue and criticism; principally, it needs time to be transformed into an experience. The importance of photography for the social sciences (visual sociology, ethnography) lies not only in its capacity to become “evidence”--as if a photograph were exact reproduction of reality--but in the opportunity to speculate about the context in which the photograph was taken, the subjects within the picture, their motives, reasons, and emotions.

In this image of Cuban kids at a window, there is an obscure space that projects itself as a horizon in the picture. The kids are looking at this obscure unpredictable horizon. We can only dialogue with that obscurity through the absent presence of Tanur. What are they seeing?

The artist, the scientist, the defender of human rights, all are part of the same person trying to communicate something through time. Tanur tries to show us something that she considers important. These are not just “two kids at window”, they are much more than that; they are people, citizens, race, gender, and with this precision, Tanur is playing with our ability to speculate and bring into our reality the awkward conversations that, without her absent presence, we are unable to conjure. How do exclusions, racism, and poverty manifest in our global south? Maybe an unfinished portrayal of two kids trying to reach something that they don’t have in their daily life is to put forward the troubling questions.

The representation of iron bars embedded in a big wall, dense plants, and a giant metal fan, makes me think about the limits that modernity established for the subjugated populations of the world. Those kids are trying to take a look at what is inside of that unknown and unreachable materiality, that is sustained by the exploitation of those outside the wall.

What do we think when we think of racism? Are kids allowed in our representation of racism and exclusion?

This speculation is part of the artistic traces of Tanur’s photography, breaking the limits of documentary photography, visual sociology, and art. Photography is about the subject, but also about the emotions of the spectator observing the photography. Without these representations, our interpretations of reality are condemned to an obscure horizon.