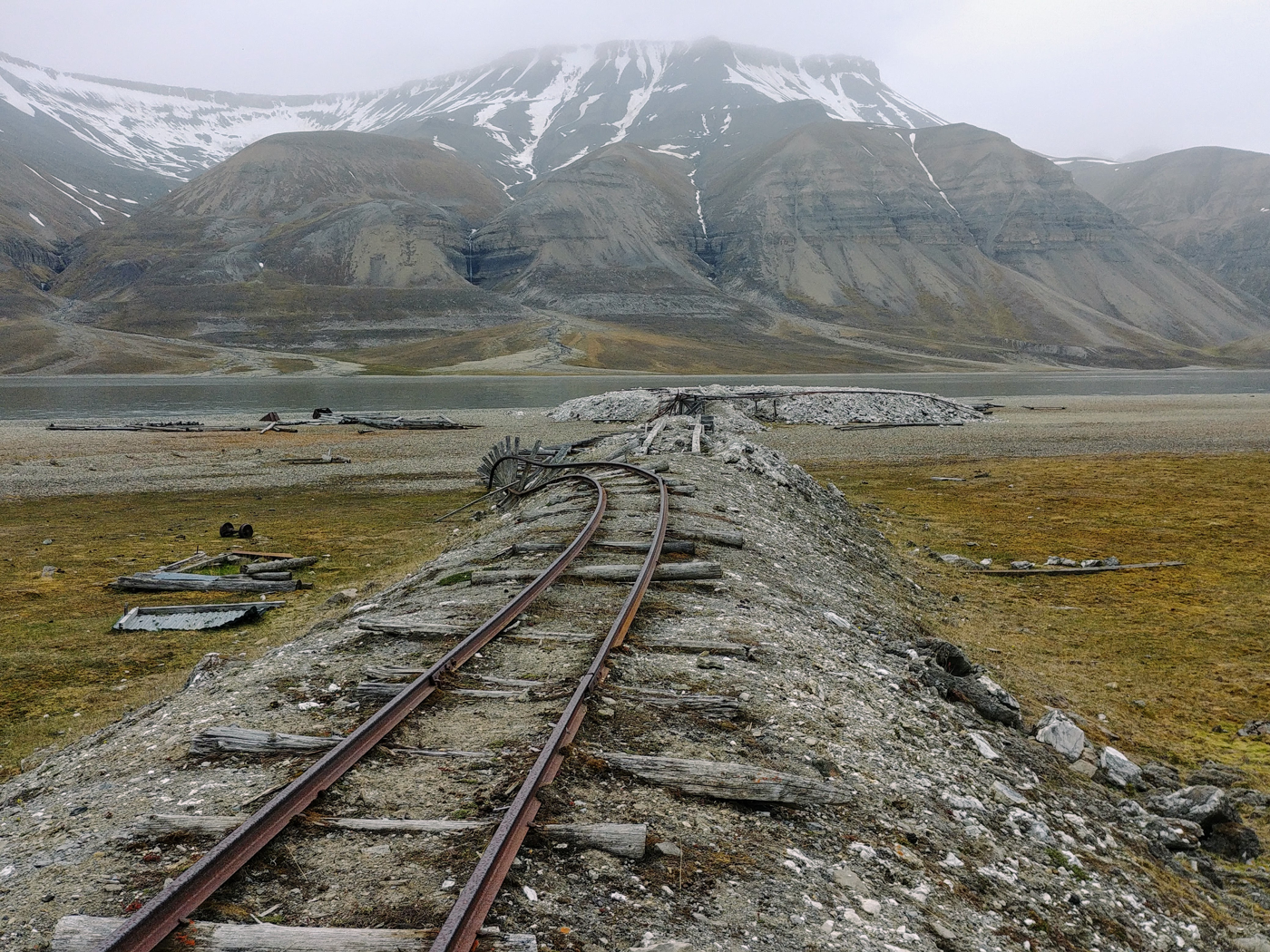 I have chosen a photograph that is similar to Rachel Tanur’s Alaska Railway (see essay 2). This photograph, also of a railway in an Arctic context, was taken in Skansbukta, Svalbard, in July 2021.

My work in Svalbard, focusing on issues of Identity of Place, uses both visual and traditional ethnographic methods. The work I conducted in Skansbukta had a dual focus: industrial heritage on the one hand and human-nature interactions on the other. My visual methods focus on photography as a method of inquiry, engaging with place through lens-based work.

HERITAGE
The photo shows a derelict railway that led from a gypsum mine to the fjord. It was one of the many mining operations that were started and abandoned in the early part of the 20th century (Prestvold, 2003). The archipelago was considered a terra nullius when first discovered in 1596. From the beginning, resources were extracted for financial gain. In 1920, the Spitsbergen Treaty conferred Norwegian sovereignty and a special territorial status upon the archipelago. In 1992, Norway passed a law protecting all manmade constructions pre-dating 1946, anchoring a politics of presence.

Unlike in Alaska, there were no Indigenous Peoples on Svalbard. The land, however, has been colonised and exploited in much the same way as in Arctic Russia, Canada, and the US. As discussed in the commentary on Tanur’s Alaska Railroad photo, these remains are part of a broader system of power and a colonial attitude toward nature.

HUMAN-NATURE INTERACTIONS
The photo also shows the other side of the bay, with waterfalls from the melting glaciers above. To get to Skansbukta, we were dropped off by boat with supplies. As in many places around Svalbard, the historical use of the land and the contemporary are linked: we stayed in an old hunting and fishing cabin for 5 days.

At the time of the railway, people came for profit. Today, people come for the the beauty of the place, an ‘Artic expedition’, or ‘last-chance’ tourism. For those who live here, staying at a remote cabin is a part of a normal experience of place with time offline and the chance to wander the mountains and fjords, to be out in nature and contemplate our human place within it.

This photo shows a man-altered landscape and an approach to place as a resource. It also shows the Arctic landscape that can challenge our understanding of human-nature interactions. With the pressing issue of climate change today, our relationship to the world around us and the power structures that shape our human society need to be questioned. Visual methods can help us to reflect on this. As Elizabeth Chaplin (2004) states, the camera can be ‘a tool to think with.’ 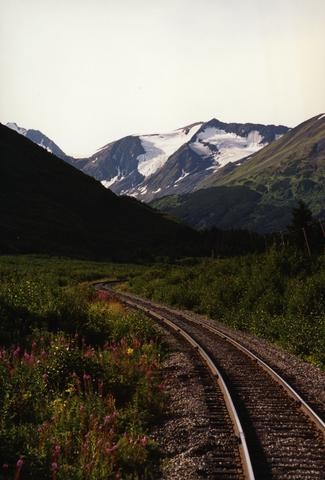 If, as John Berger (1972) states, all photos are framed and the photographic image is a record of how X saw Y, how can I as a viewer, in a different time, physical locality, and positioning, engage with it? The answer lies in the fact that some photos resonate differently from others, based on our own experience. I chose this image because I work and live in the Arctic, although in Svalbard, not Alaska. I do not know the place this photograph was taken, but I know others like it: places where extraction and exploitation of natural resources are part of the landscape (see essay 1), as they are here.

In working with another person’s photograph, there is much one cannot know. There is no lived-experience of place, no context to situate what is being shown or not shown (Pink, 2013). What we can try to understand, however, is how the picture was framed on the one hand and what the picture shows on the other.

FRAMING
The photograph is framed by Rachel Tanur so that the curve of the railway leads the viewer’s gaze from the bottom right of the image up into the mountain range, where it then continues on to the mountains that are nestled one behind the other. Daniel Rothenberg’s description of Tanur’s photographs, in which “the hint of motion, rhythm and artistry” combine and reveal the woman behind the lens, is indeed true here. There is a feeling of peacefulness, calmness, and appreciation for the beauty of the place, which contrasts with the inherent noisiness of a railway when it is in use.

Here, the railway acts as an invitation to look at the flow and movement of the landscape by following the curve of the manmade tracks. The attention given to the framing, balancing the manmade elements with the natural landscape, elegantly executes a vision of harmony and quiet.

CONTENT
Although the photo might appear to be empty of humans upon a first look, the man-altered landscape is centered (even if the railway tracks start off-center). Rather than show an idealised landscape, Tanur presents the manmade traces as an integral part of the whole, as in the work of the photographers of the New Topographic Movement. Whether or not the railway pictured is still in use, it stands as a testimony to how the Western world industrialised (see essay by Josephine Barnett) and how the ensuing power configurations impacted the everyday contexts of those living in Alaska.

According to Doreen Massey (2015), how we conceptualise space impacts how we interact with it. Railroads in Alaska, begun in the early 20th century, are a material memory of how the territory was seen as open to settler expansion and western industrialisation. As in other colonised spaces across the Arctic, the Indigenous People(s) and their lifestyle(s) were not taken into consideration.

This is an interesting image because it is simple in its construction yet conveys complex meanings, providing a space for reflection.